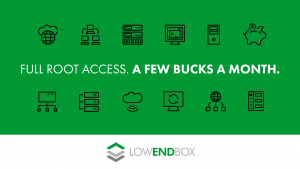 Ansible is an automation platform that can be used for provisioning, configuration management, and deployments. It does not require deploying an agent and is suitable to manage any system that allows SSH connections and can run Python 2.7.

Ansible is very powerful for fleet management. Currently, many IT organizations espouse a “cattle not pets” or “stamps not snowflakes” mode of managing in their IT. If your servers are pets, you lovingly create each one by hand, tweaking and tuning it to its specific purpose. This is fine if you have 10 servers but does not scale well. If your servers are cattle, you can create them by the dozen, with the idea that you manage each system identically with common policies.

For managing your own personal LEBs, Ansible can accomplish several things:

This tutorial will not attempt to cover everything that Ansible can do, but rather show you how you can quickly make managing your LowEndEmpire more pleasant.

In part one, we’re going to introduce some Ansible concepts and get Ansible setup on your control node (the master).  In the next tutorial we’ll use Ansible to manage some hosts.

Control Node: the host that serves as a master, dispatching tasks to other hosts (or itself)

Host (or node): a remote machine that Ansible manages

Roles: you will assign roles to a host or group of hosts, such as “webserver” or “database server” to manage them. A host can have many roles.

Playbooks: these contain a list of plays (think sports), which are rules that say “run these tasks on these hosts”. A task in this context can be something like “update packages” or “copy this file”. Typically you’ll run a playbook, which says “for this group of hosts, run these sets of tasks”.

The Name Ansible Itself: Science fiction author Ursula LeGuin created the word “ansible” to describe a means of high-tech superliminal communication equipment, where messages can be exchanged nearly instantly even over interstellar distances.

There are many more terms but these are enough to get us started.

In this tutorial, we have a control node called master, and a target called (wait for it…) target. Both are going to run Debian 10, but of course Ansible can run on many operating systems.

First, add the following line to /etc/apt/sources.list so you pick up the Ansible repo:

Then run these commands as root:

Since everything Ansible does is done over ssh, we’ll want to create an ssh key. You can either generate a passwordless ssh key or use ssh-agent.

In this example, I’m running my control node from a secure location – my home, safe behind a NAT’d firewall – so I’ll be using passwordless ssh.

To generate an passwordless ssh-key, issue the following command, answering with a return when prompted for no password:

There’s no software to install, but you do need to setup the ssh key. Some VPS providers allow you to run a script as part of your setup. If so, putting your Ansible ssh key into root’s authorized_keys is easy to go. If your provider doesn’t offer this functionality, then you’ll need to setup the SSH key manually.

Here is a script that can be used to ensure that the Ansible key is setup properly. You can either run it as a setup script in your provider’s provisioning, or you can copy it to your target node and run it there. You could even login to your target node, copy/paste this script to a file in /tmp, and then execute it. Be sure to change the SSH key (where it says YOUR SSH PUBLIC KEY) to match your control node’s public key.

We need to give Ansible a list of hosts to manage. We can also use list this to define groups.

In this case, ‘target’ is going to be a database host. So we’ll edit /etc/ansible/hosts to create a ‘db’ group and put ‘target’ into it:

Look at the examples (commented out) in /etc/ansible/hosts to get a feel for how you can group hosts and specify them.

You’ll want to modify /etc/ansible/ansible.cfg (the main Ansible options file). If you use the default Ansible file locations, you’ll have less to modify, so here I will just call out some options to consider.

If you’ve changed the SSH port on your target hosts, you can use the remote_port setting to change this. For example, if you use port 32222, change this line in the (defaults) group:

You may wish to disable host key checking, otherwise you’ll need to either use ssh-keyscan to add new hosts to your control node’s known_hosts or manually answer ‘Y’ the first time a playbook is run:

Finally, you need to tell Ansible which private key to use, so be sure to set this option:

You’ll want on a work area on your control node for ansible, where you can:

In this tutorial, we’ll keep it simple and call the work directory /ansible, and keep any files we want to distribute in /ansible/src

Now that we’ve got Ansible setup, we’ll show you how to exploit its capabilities in the next tutorial.