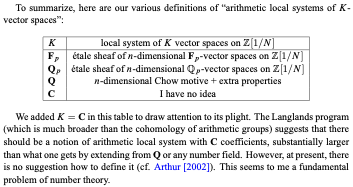 While for $mathbb{F}_p$ and $mathbb{Q}_p$ there is no ambiguity in the definitions, for $mathbb{Q}$ it is not easy to see over which field to construct representations of arithmetic étale fundamental groups because $GL_n(mathbb{Q})$ has “too few” finite subgroups, so tentatively he proposes Chow motives, but adds (on p. 277) that with Ayoub and Cisinski-Déglise’s theories of motivic sheaves now available it might be possible to give a better definition. For $mathbb{C}$ he says he has no idea and deems it a fundamental problem of number theory.

Q. 1: For $mathbb{Q}$ what would be the benefits of using motivic sheaves in place of Chow motives? Would they furnish more local systems as needed for Langlands correspondence, or just be easier to work with? Has his suggestion actually been worked out using any of several constructions of category of motivic sheaves?

Q. 2: For $mathbb{C}$ is there no definition because there is as yet no motivic Grothendieck group whose representations these local systems would arise from? Or is it some other reason? Reading the referenced paper of Arthur hasn’t clarified it for me even though the paper is as clear as it could be.