I have a SharePoint Online list with a number of reference columns: they need to be included in the view so that I can reference them in the JSON conditions in other columns, but the users don’t usually need to see the values.

To keep them out of the way, I’ve formatted them so that, if they aren’t null, they show “Hover to View” and then display the contents if the user hovers: 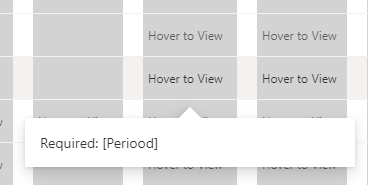 I know the conditional logic is correct because it works as expected to show or hide the text in the field (as well as the hover content):

SharePoint indicates a problem with the code for isBeakVisible because it expects a Boolean value:

As far as I can tell, false or true are the values I should be using (without quotation marks – I’ve tried with and it doesn’t solve the problem). If I change the statement to remove the condition it works correctly (you can see that the field is highlighted because my mouse is over it, but the beak doesn’t show):

This works (with either false or true) as long as I don’t have the condition:

How can I make the output of my condition a boolean value so that the formatting works as expected?