I think my d5000 (or lens?) AF is malfunctioning, but I’m not sure. I’m using the stock lens (Nikon DX, AF-S NIKKOR 18-55mm) It takes seconds (like 7 seconds) for it to find focus and seems to keep going back and forth in and out of focus. I can see the lens/image and hear the motor move it in and past focus to back in focus and it goes several times during focusing. It kinds of does like a quick search on focus then small adjust then a large adjust then fine adjust and finally decides and takes the picture. This is even with a tripod and still shot, i.e. it shouldn’t have to change focus decision. Sometimes it seems to stop with no part of the shot in focus. Note I also typically have VR off not sure that would make any difference though.

My other thought is that I hadn’t been using it much for a while, so I’m also not sure if this was the normal focus behavior. I’m not sure if cleaning would be appropriate? I haven’t physically cleaned the sensor. What I end up doing to work around is MF, AF and flip to MF, or AF and not release the shutter button fully.

I’m not sure if this could be just a setting? I don’t think I’ve messed with the focus settings other than switching from AF to MF or locking the focus.

My Nikon D3100 out of the blue cannot focus correctly.

It seem the that the focus motor always stops at the end of the run (Infinity) and cannot lock on the target, thus cannot release the shutter. I tried with two other AF-S lens but still the same.

This only happen when I use the viewfinder. The AF motor works fine and can focus on the target if I use the live view (LCD).

I tried the single point auto-focus, Reset to Factory Setting, and I tried cleaning the contacts but still cannot get the AF to focus on the target through the viewfinder.

What could be wrong and what can I do about it?

Get it serviced as soon as possible or risk prematurely having to replace parts instead of only having to have them lubricated.

As the mechanic in a 1970s commercial for Fram oil filters says: 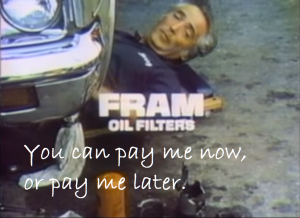 If you have the older version that was replaced in 2013 with the newer one, replacement parts may no longer be available. Even if they are, since Nikon no longer sells parts to anyone, you’ll have to pay Nikon to fix the lens. You can often find third-party repair services that can do a clean-and-lubricate much cheaper than what Nikon will charge.

Yes, two individual lenses that are the same model number can affect AF performance in different ways. This is because the primary purpose of in-camera autofocus adjustment is to adjust for the result of differences in manufacturing tolerances between individual copies of lenses when they are used on individual copies of cameras.

Calibrating a camera to match it with a certain lens when using a specific AF point, such as the center point, is no guarantee that the camera will be calibrated for other AF points using the same lens.

For example, I have a Canon EF 100mm f/2 lens that requires different AFMA (Auto-Focus Micro Adjustment, the name Canon uses for what Nikon calls AF Fine-Tune) settings when used at shorter focus distances than when used at longer focus distances. It’s a pain to have to change the AFMA setting to match the distance range at which I’m shooting. But the in-camera AFMA feature only allows for one adjustment per prime lens.

Notice that above we said calibrating a camera to a specific lens. This is because that is what you are doing with the AF-S Nikkor 50mm f/1.8G when you use the camera’s on-board AF-Fine tune capability. AF Fine Tune does nothing to change how the lens responds to an instruction from the camera to move the focus position by a certain amount. Instead, it adjusts the instruction the lens sends the camera when the camera has determined the lens needs to move a certain amount.

On the other hand, using the Sigma Dock and their Optimization Pro software actually changes how the lens responds to various commands from the camera at different focal length and focus distance ranges.

Could this be explained by a faulty 50mm lens?

So what does this all mean for your situation? Mostly it means you can try and determine why your AF-S Nikkor 50mm f/1.8G behaves the way it does. Only then can you determine what needs to be done to correct it as much as it can be corrected. Some possible things that could be contributing factors:

With a more expensive lens it would make sense to send it in to Nikon Service to see if they can sort it out. But with the AF-S Nikkor 50mm f/1.8G, unless the lens is still in warranty the cost of any repair will probably be an appreciable percentage of, if not more than, the price of the lens.

When I shoot pictures of badgers I recently found that the Nikon D500 + 200mm F/2.0 is a great combination. Badgers often come out very late when its quite dark but they cant see too well so you can get relatively close to their den. I used to shoot the 200-400mm F/4.0 but the 200mm F/2.0 gives me two stops more light which gives me almost an hour of extra time when the sun sets.

The only problem is: Focusing can get tough sometimes.

My question is: Could an infrared torch be used to assist the focusing of the camera? I guess that it wont work with mirrorless cameras like the Z7 (or in live view with the D500) since they should have an infrared filter and the focusing gets done at the sensor plane but the D500 has a dedicated autofocus sensor bay.

I’m having a problem with my Fuji X-T2; it doesn’t make pictures anymore. When I try to press the shutter, it will focus and it makes the focus sound but then it does nothing when I press the shutter button. I’ve already looked through the manual but none of the problems listed there seems to be happening. I’ve already tried a different card and placed it in the other slot but the same thing happens. Also in recording mode or any of the other modes it will only focus but not record/click.

As far as I can recall I didn’t change anything in the settings (or at least not on purpose). Yesterday it was still working, then this morning I took the pictures of the SD card on my laptop and now suddenly it doesn’t work anymore…

The weird thing is that the camera doesn’t give any error message or anything (which I think should be happening if there’s a problem with the SD card or battery or something like that). In the picture below I’ve got the shutter button pressed fully down, you can see it’s focused and as far as I can see, nothing is weird?

Thanks in advance if someone know what’s going on!! 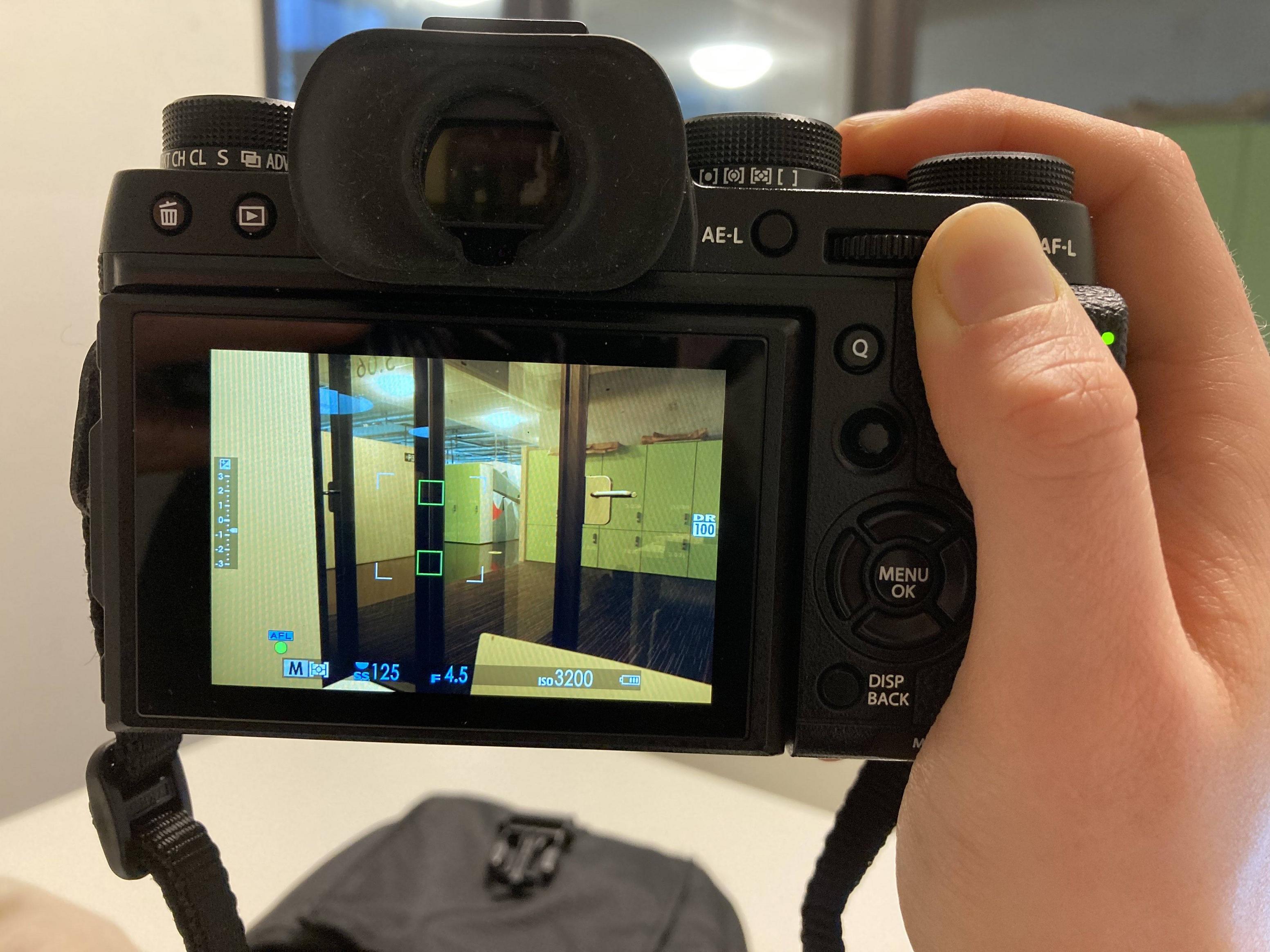 I’m having a problem with my Fuji X-T2, it doesnt make pictures anymore when I try to press the shutter, it will focus and it makes the focus sound but then it does nothing when i press the shutterbutton. I’ve already looked trough the manual but none of the problems listed there seems to be happening, I’ve already tried a different card and to place it the other slot but the same thing happens. Also in recording-mode or any of the other modes it only will focus but not record/click.

As far as I can recall I didn’t change anything in the settings (or at least not on purpose). Yesterday it was still working, then this morning I took the pictures of the SD-card on my laptop and now suddenly it doesn’t work anymore…

The weird thing is that the camera doesn’t give any error message or anything (which I think should be happening if there’s a problem with the SD card or battery or something like that). In the picture below I’ve got the shutterbutton pressed fully down, you can see it’s focussed and as far as I can see nothing weird?

Thanks in advance if someone know what’s going on!!

I myself own a Canon EOS R and cannot believe how much I needed eye AF until I tried it. After Canon has started shipping R5 and R6 I am wondering how the eye AF differs in these models compared to especially the R.

I have yet to find a review that goes into detail about this specifically.

I am hoping that someone in here can help?

According to this Blog post by LensRentals.com owner Roger Cicala, the 5DIII has less than 1/2 the standard deviation of the 5DII with regards to Phase detection Auto Focus. But to get that additional benefit, one must also use Canon lenses introduced since about 2010. All of the testing was done using the center focus point.

In general, using the center focus point should yield faster, more accurate focus with faster lenses such as the 50mm f/1.2L and f/1.4. The 5DII can be an exception to this rule. When shooting in AI Servo AF, if C.Fn III-07 is enabled, there are six small AF Assist Points clustered within the spot metering circle that are active in addition to the Center Focus Point. The location of these six AF Assist Points are not indicated in the viewfinder! Yet the camera may be using one of them pointed at something that has higher contrast than what is located behind the square in the middle of the viewfinder when it decides the focus distance.

Here’s the Map for the 5DII’s focus system. 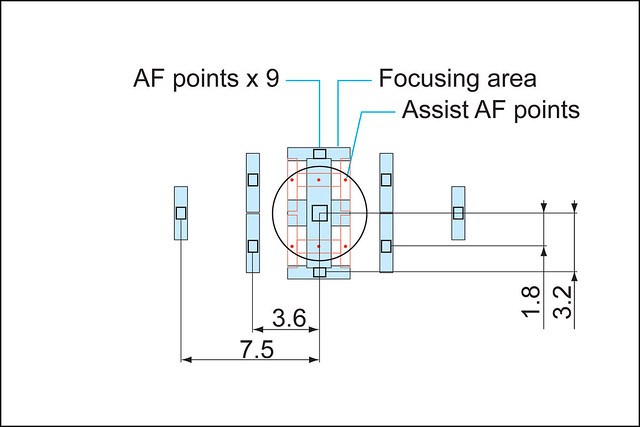 The entire series will tell you just about everything you’ve ever wanted to know about phase detection AF accuracy and consistency.

Autofocus Reality Part II: One vs. Two, Old vs. New

Does the number of phase detect auto-focus points affect focus accuracy in mirrorless camera? And if so, how and why?

I am considering burying either a Nikon Z6 II or a Z7 II. They have 273 and 493 AF points respectively. For comparison, the Sony A7iii has 693 AF points, a lot more. I have read/heard that the Z6 struggles a bit with focusing the iris of the eye. Does this have anything to do with how many AF points? Perhaps less focus points means a lower chance the point will be in the right position on the subject?
Or maybe the contrast detect will work together with phase detect and the issue is not the number of points?

I will appreciate any informed answers.