I am trying to understand, why I am unable to run apt-get update from within my docker containers, either debian:latest or ubuntu:latest.

apt-get update will time out with:

I would like to find out why apt-get udpate is not working while I’m connected to any bridge network on the virtual machine. So any hints on how to debug this problem are very appreciated.

When a new object is added to the bridge, the bridge shakes violently, and when objects are added even faster, it breaks.

Code for adding a new object:

The first cube is kinematic.
prefab: 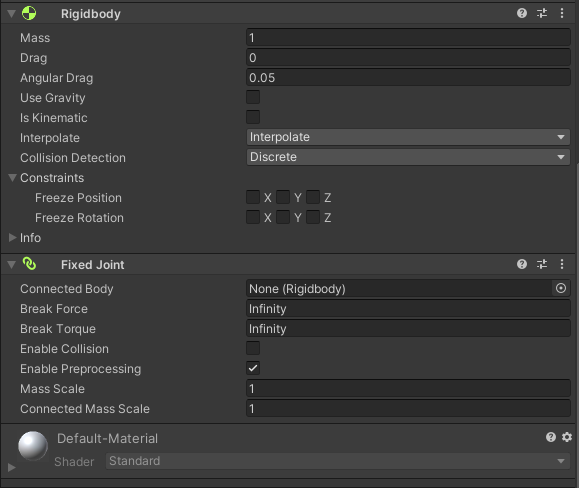 How can you solve this?
Thanks for help

I’m a 20 year user of Photoshop and never had this happen before. After creating HDR raw files in Adobe CC Bridge ACR and enhancing them, I lost all of the edits after moving the files (note: the xmp files are still there). I didn’t even move them out of the folder, I just sorted the folder by “Type” so that all of the newly created HDR files would be put in one place and easily grabbed to move to a “selected folder” for image processing. I’ve deleted Adobe Bridge and Photoshop and re-installed. I did a “Ctrl+Alt+Shift” to reset the preferences for Bridge and that didn’t do anything. I’m at a loss. This has been happening to the last 6 projects I’ve edited and then I have to re-edit and not move them in anyway in order to process into jpegs. Once I move them, the edits go away, but not all the edits. On some of the images, some remain. Sometimes it happens to only part of the images that are edited. There is no rhyme or reason. I don’t know what else to do?

I have the following setup: 2x Windows Server 2019 VM on Azure in the same virtual network. One of them is a Docker host, and its name is SRV-ONE. The other one is named SRV-TWO. I’m using default Azure-provided DNS, and I can ping each other by name without issues. They are on a 10.2.0.0/24 subnet, having IPs provided via DHCP by Azure (Default gateway is 10.2.0.1).

However, there are two requirements: the first one is that our containers should be capable of reaching not only the Docker host but also other machines in the same network. So, I configured the Docker daemon.json to search for the suffix used by the VMs and to not create the default NAT, so I could create my L2 Bridge because it is better to work with it when running virtualised Docker hosts on Azure.

The second one is that the containers need access to Azure IMSD API(Metadata Service, at 169.254.169.254), which is non-routable. So, as a test, I should be able to retrieve Metadata information from a VM through something like this:

I’m using Azure Global DNS to provide name resolution, which is 168.63.129.16. My Docker Network creation command looks like this:

With this setup, I’m able to do the following with a regular “disposable” container:

How could I reach internet addresses and also other VMs inside this subnet with this setup?

For setting a vpn connection in bridge mode using openvpn, the documentation of OpenVPN for configuring a bridge mentions that the OpenVPN client must have at least two Ethernet interfaces, one connected to the Internet, one connected to the private LAN segment, and it remarks that we should never bridge a TAP interface with the same ethernet interface you use to connect to the internet, as that would create a potential security hole.

Why this configuration creates a security hole?

This is to do with weighted odds. I think this is best to show with an example:

So I have the following bridge chart values:

Is this even possible to show in a legitimate way?

I need to transfer a lot of files between two 2019 MacBook Pros, but when I connect them using a Thunderbolt cable, the bridge never connects and assigns an IP via DHCP.

I tried manually assigning an IP and subnet mask to both of them, but still can’t connect them.

What is wrong here?

The link below shows highlighted columns that I want to be selected in a query where the mining_water_inventory_id is common.
The problem is my teacher has only taught me simple queries such as

but I have no idea how to select the highlighted columns by mining_water_inventory_id.
thanks

In the case where $|cdot|$ is the euclidean norm of $mathbb{R}^d$, $tmapsto|W_t|$ is a Bessel process which is well known but I can’t find any related paper tackling the above probability.

Currently I am using a Raspberry Pi to bridge an ethernet connected printer to wireless internet and have used DNAT successfully to give the printer internet access, manually forwarding the printer’s port 80 to the Rpi’s wlan0 interface port 80 along with other needed ports to access the printer using outside hosts. I’ve also been able to use Proxy ARP so that the printer’s static IP address is visible on the network, the Pi responding to ARP broadcasts on the printer’s behalf and proxying ARP requests for the printer. What I would like to do is combine the functionality of the DNAT approach with the IP separation provided by Proxy ARP.

The problem is that I cannot figure out how to seamlessly accomplish the needed forwarding/spoofing with the Rpi so that instead of directing requests to the Pi’s port 80, outside hosts can make requests using the printer’s IP directly even if it’s on a different subnet, say 10.1.2.254:80, to access the http page.

Is it possible to accomplish this routing in tandem with Proxy ARP? Are there other approaches that are better suited for this arrangement, or could IP aliases alongside DNAT accomplish this illusion that the printer’s IP and active ports are also present on the network/another network?