As a UX professional, I’m not convinced there really is a difference.

The article jonshariat links to makes a case for categories being mutually exclusive. If universally true, then that’s perhaps the one difference, but given that many sites use tags as a form of category browser, I don’t think that holds true either.

But let’s assume it does. From an end-user navigation POV, the difference is then whether or not your ‘buckets’ are meant to be mutually exclusive of not. So, perhaps that’s the question you need to ask…for the particular needs of your users of your site, should the data be put into mutually exclusive buckets, shared across buckets, or both?

As for ‘understanding’ that, well, that’s up to how you design the UI to navigate the structure.

I’m currently in the process of analyzing our company’s interfaces, which are not document nor centrally managed and as a result, very heterogeneous. As this is a huge task and it’s part of a master thesis, I’m concentrating on three conceptual information:

The last step gives me a bit of a hard time; as it’s a scientific work, I would need some reasoning, how and why I would categorize data, but I didn’t find anything about that topic in literature. Checking enterprise frameworks like TOGAF and Zachmann, but also known books like “Enterprise Integration patterns”, “Microservices patterns” etc., I didn’t find any good source about that topic.

The only hint I found was in a PluralSight course with this image: 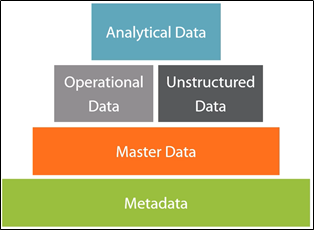 But I didn’t find any more information where this is from nor does the author give details, how to proceed hereby.

Is there a known data categorization strategy around? Or is this just not worth the effort and it makes sense to not categorize the data at all?

Let we have a tree of categories as first column and commission as a second column. Commission has inheritance abilities, e.g. if I set commission on Category 1 by default it will be applied to Category 2 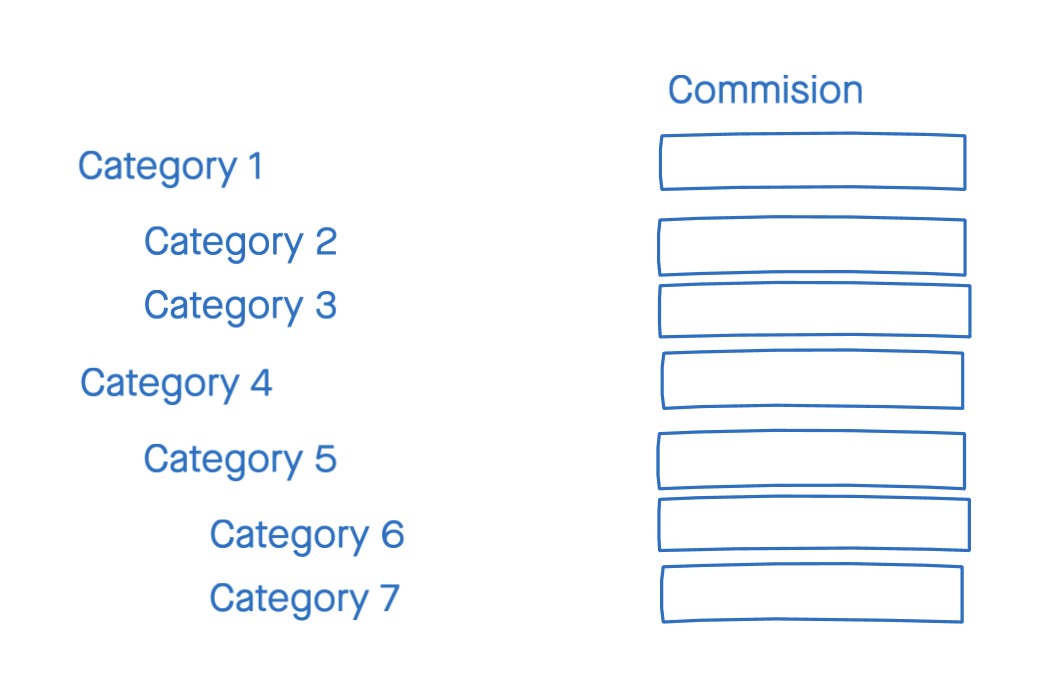 We can set commission also to brands for different categories, simplest example: 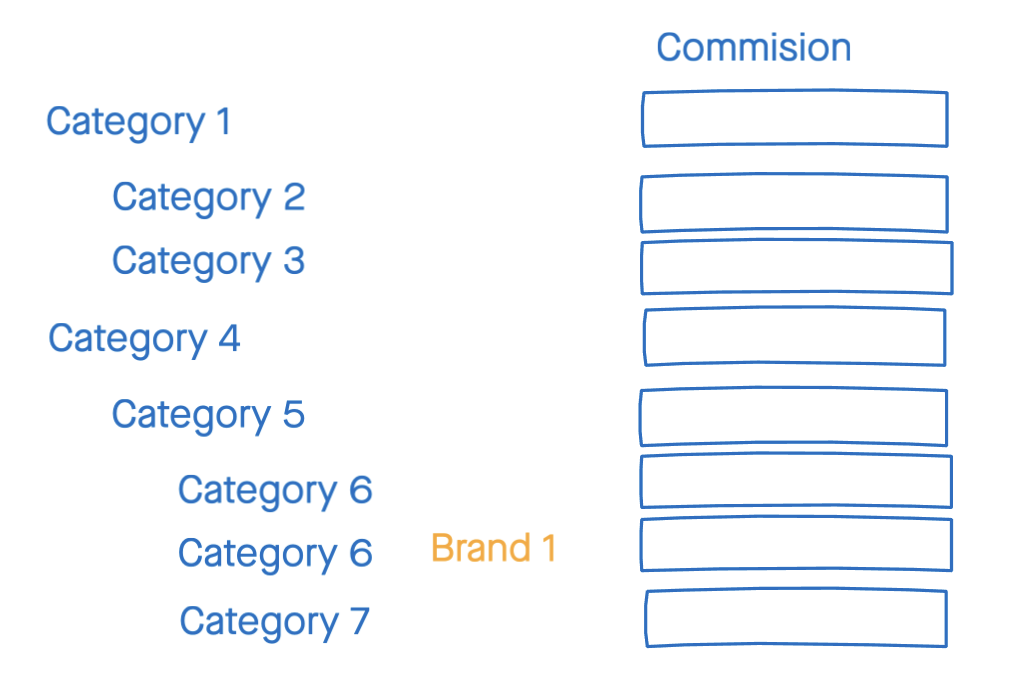 Currently it duplicates category row, but with brand label.

If we set brand commission on parent category it should be inherited by subcategories. In current UI it will duplicate a subtree: 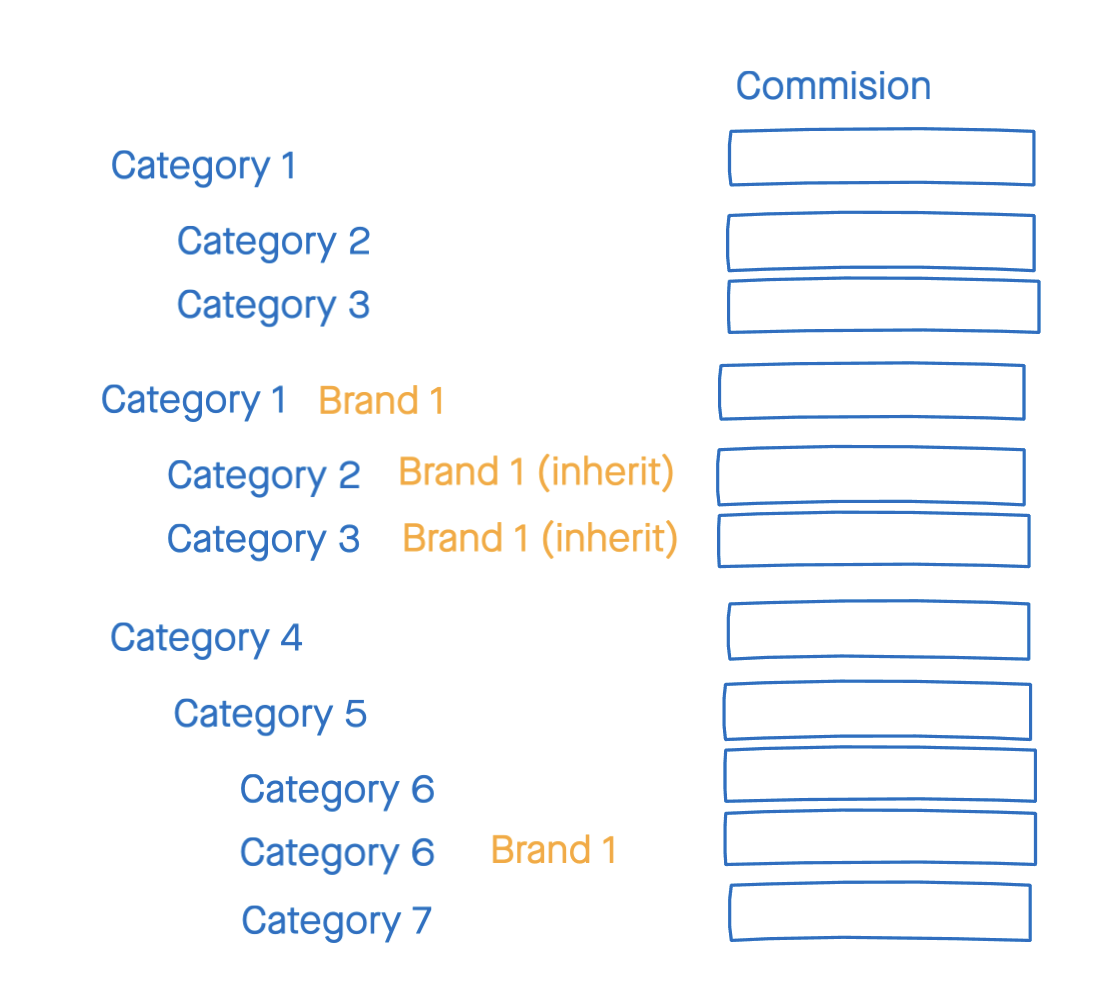 How to display it without duplication of subtrees of categories?

I want to build a sidebar with categories and sub-categories in it, so to say nested categories, but without a limitation on depth, so you can have as many sub categories of unlimited number of parent categories.

The thing and the problem is, that the sidebar is limited by width and when sub-category is present, it is nested with a bit of right padding(to illustrate it is a sub-category), so if you have enough depth in sub-categories it can cause problems, as there is limitation of width and therefor there won’t be any space left to add right padding. I can’t find a good solution for this, please share your thoughts with me, perhaps we could find a better way around.

Here’s a picture to illustrate how it might look: 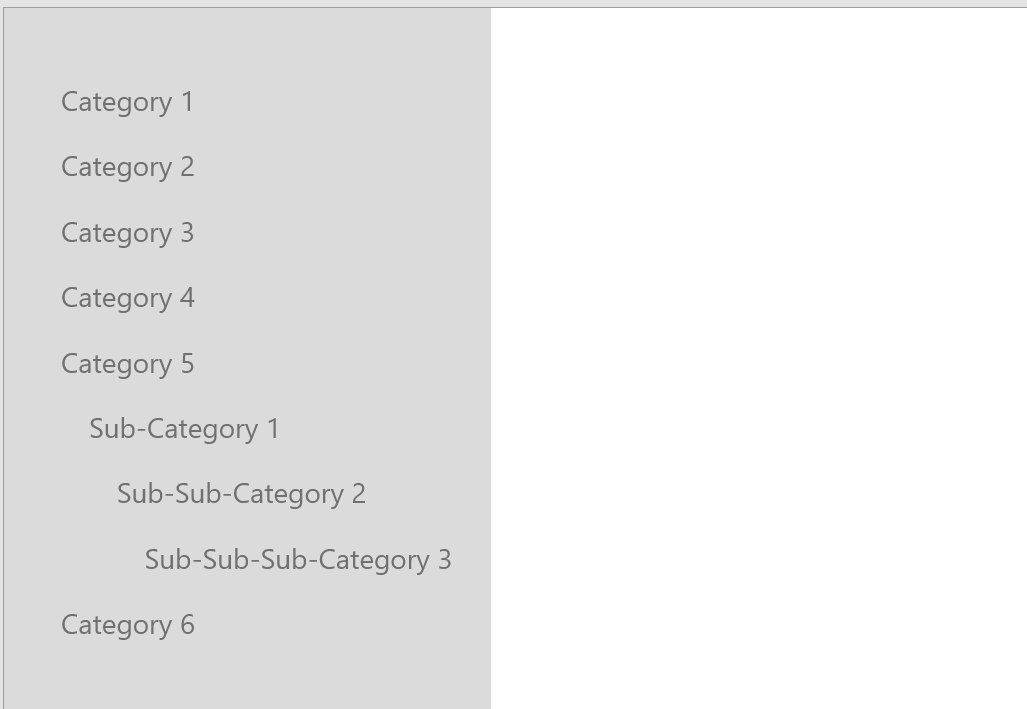 I'm looking for a way to automate the categorization of a current list of expenses.

According to the nlab, horizontal categorization is a process in which a concept is realized as equivalent to a certain type of category with a single object, then this concept is generalized to the same type of categories with an arbitrary number of objects. The prototypical example is the concept of group, which horizontally categorizes the concept of groupoid. It is well known that in some parts of algebraic topology, groupoids are much more practical than groups. Similarly, monoids are categorized into categories, rings into linear categories, etc.

I have two questions about this. Let C be a concept which horizontally categorizes a concept D.

1) In many examples, C and D have been known and developed independently of each other. Or at least, D was not introduced as a horizontal categorization of C, but rather this connection was made later. For example, I'm pretty sure that the k-linear categories weren't introduced as a horizontal categorization of k-algebras; instead, they were introduced due to the abundance of examples of (large) k-linear categories that appear in everyday mathematics. Although representation theory seems to be in a current advance from a generalization of k-algebras to small k-linear categories, the concept of a k-linear category was already there before that. Are there examples where D was developed for the purpose of classifying C, let's say to solve some problems which concern C but which cannot be solved with C alone? Maybe categories C * (categorize C * algebras) could provide such an example, but I don't know the history of this concept. And maybe there are other examples too?

2) In all the examples I know, it is trivial that C has a horizontal categorization and that it is D. Are there more interesting examples where, when you look at C, it doesn & # 39; is not even clear how to interpret C as a category type with an object? I would like to see examples where the connection between C and D is deep and surprising. These examples should illustrate why horizontal categorization is an important and useful concept in practice.

I could also ask a more provocative question: if a mathematician working outside of category theory reads the nlab article in its current form, why should he even care, because, after all, concepts C and D have already been there without the categorization process?

The following questions then come to mind:

Overall, I think you should consider this in the information architecture problem, but depending on your use cases.

Now, come to think of it, it looks like the "category" might not be enough to describe your transactions. In particular, car expenses would likely include all expenses related to a car. It seems like you might want something like a "category" for "insurance" and then a "subject" or "subject" for a car.

In our data table, we have three types of columns. Let's call these types A, B and C. There is only one column that is type A, maybe 4 to 7 columns of type B and the others are of type C (the least important ).

Does anyone have any suggestions on how to visually communicate these column categories? I've thought of using an icon somehow, but it seems a bit bulky because our table is so cluttered. Thank you.