I am setting up a site in English which has its own German translation (don't worry, I lived in Germany and I have a degree in Germanic and Slavic studies, that’s good German …).

I wonder what is the best practice for extended Latin characters in URLs.

Am I better to link it internally as:

I have no problem doing the above and I am very happy to use .htaccess mod_rewrite if and where necessary to ensure that all variants 301 to the correct canonical page.

On this note, a secondary question: what format (if different) should I use for the in the ?

Try this, I only want uppercase and lowercase letters and characters to be inserted: #, &

I am currently on mac OS Catalina 10.15.2, had switched to zsh using the proposed approach and using the default system Terminal.app.

Writing characters with diacritics like ľščťžýáíé (my context is Czech / Slovak) in the terminal worked fine in the old Mac OS and in bash, but is now stopped in zsh.

So each character is replaced by which is highlighted in the terminal. 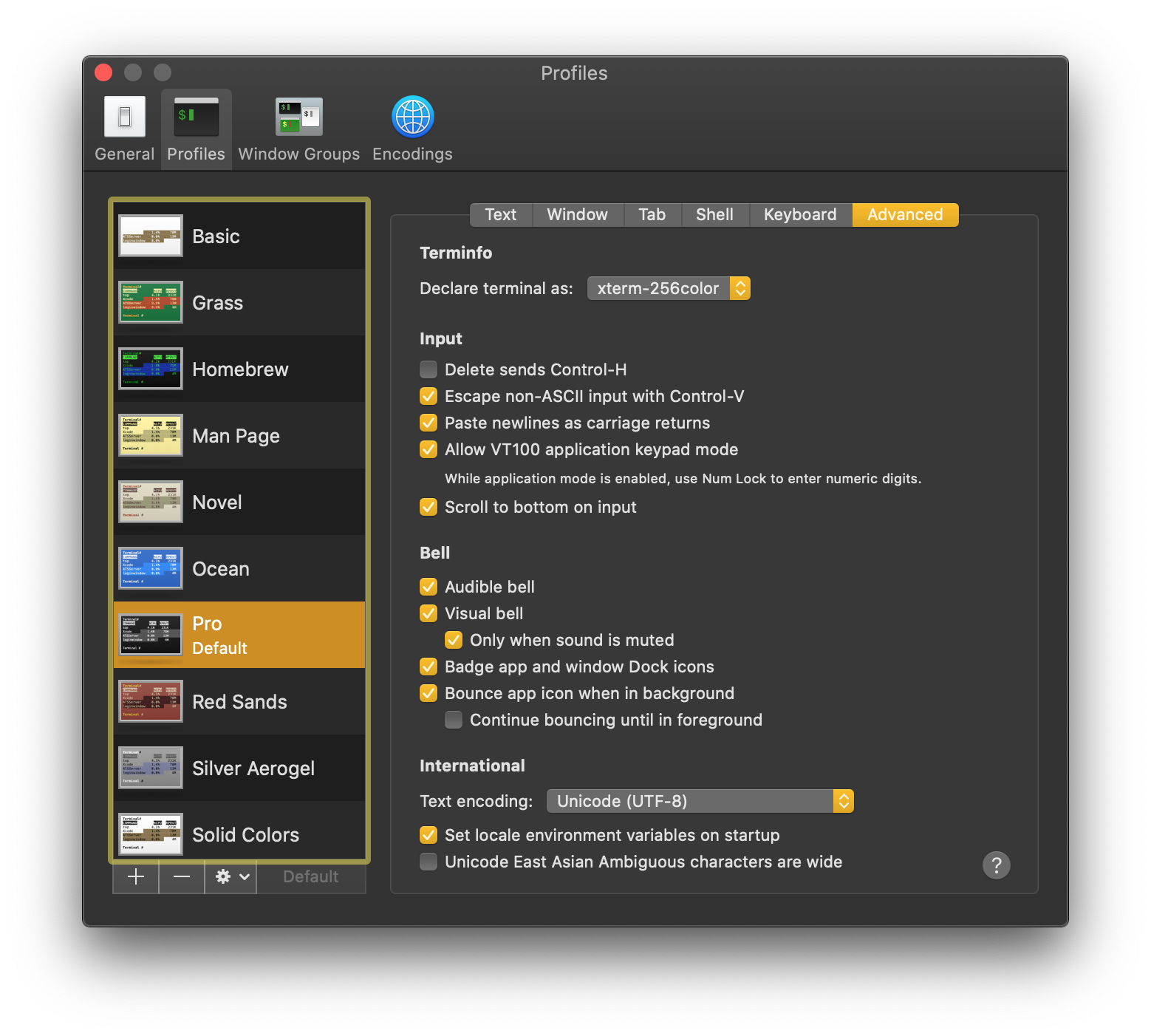 my ~/.zshrc is empty. What other configuration options could be behind this?

So we have shared hosting on cpanel with a dedicated IP on say example.com. What we want is to download a default HTML file somewhere, which is used for all domains that use ns1.example.com, ns2.example.com as name servers, without our having to make a DNS entry for this domain in our server. Is it called the default apache page?

To clarify: We have registered ns1.example.com and ns2.example.com as name servers (glue records) by pointing them to the dedicated IP of our hosting. What configuration should we do on our server so that if randomdomain1.com, randomdomain2.com … randomdomain100.com displays the default file without us having to make an entry for random domains on our server. Much like the operation of domain parking companies.

I have an old paper wallet with private keys of 58 characters (all starting with a 6). These can be imported for example on blockchain.com, but since I still have BSV on this key, I have to import / scan it into ElectronCash or ElectrumSV, which does not take this format.
So, does anyone know how to convert this key to WIF (without coding if possible)? Thanks in advance!

I have a group of 4 noobs, 1 is a pro on other games but new on 5th (like me – but I haven't played in years), 3 actually play their first characters. The ages range from 13 to 50 (I love challenges).

I don't like to tell players what they can and can't do if the rules don't explicitly say so, but I also hate bashing new characters for the naivety of new players. I also try to keep the house rules to a minimum (just to make it easier for them to learn the basic rules). So I "chose" to read the Passive Insight score as a social version of passive perception that can "determine if someone in the group notices a hidden threat" (PHB Ch.8).

One of the PCs, a first-level thief, was preparing a trap for a captain and a slave ship crew to assist the city guard. To add to the tension, I asked the captain to make a sneaky reference to human cargo as "goods". The player, morally offended, replied, "shut up silly freaking" Caught off guard, I asked for his passive glimpse and I replied: "With your knowledge of the underworld, you know that insulting like this in front of his men will require a violent display of authority. You can say it, but are you sure you want? "

A little later, the same player went to give a final blow to an NPC who surrendered while others struck to neutralize. I did the same thing, ending with: "Your character is present enough to know that the execution of a helpless man in front of the guard would be murder. They might not notice it, or they could let him go, but maybe not. Do you want to kill him or make him unconscious? "

I'm ready to let the players do the wrong thing and suffer the consequences, I just want them to know the consequences in advance. The worst part is that I already know the score – it is inside my screen with its AC & HP, I only ask to bring it from the spirit of his character instead from my mouth. Of course, I fear that this will result in passive and aggressive assault theft – which is why I have only done this 3 other times in 13 sessions so far.

My question is, am I actually following the rules by doing this?

Bonus question: Is this in fact an unbridled way to force the behavior of the characters while pretending that I am giving them free will?

Uncaught error: syntax error, unrecognized expression: # option skill-game-list [value = & # 39; learn to count until 5 & # 39;]
There is an error sent by Chrome when I try to select an item with a specific value.
this value is loaded from DB.

Let's use 0 and 1 for the binary parallel.

Is it possible to effectively reference this 256 character alphabet this way?

It is a question of separation of Player / Character knowledge and what makes sense. The extent of RAW that we have is that you are allowed to try again, but …

Multiple capacity checks (DMG 237)
Sometimes a character fails a skill test and wants to try again. In some cases, a character is free to do so; the only real cost is the time it takes. With enough attempts and enough time, a character should finally succeed in the task.

The kicker is the section I have bolded. What does "in some cases" mean? We have no precise definition on this.

We can assume that a dice result represents the results of your effort, not how hard you tried … so, at least, the characters know they were doing their best. Ultimately, it comes down to this: if you couldn't see the result of the dice (for example, the DM rolled for you), only the actual output of what happened, would you try again?

Search for a room

Suppose, IRL, that you walk into a room and decide to look and see if there is a safe in the room. You search the room from top to bottom and can't find the safe. In fact, there may be a safe in the room – you just didn't think of pulling the light switch from the wall and pressing the button on the side, which would have open the hidden compartment where the safe is.

On the other hand … suppose you lost your keys in your apartment. Well, you know they're there somewhere, so even if your first search "pass" in the apartment fails, you're going to try again because you're aware (or at least believe) that the thing you are looking for exists and is in the place you are looking for, so you know you have "failed" in your search, and try again.

It's pretty cut and dry, honestly. You tried to climb the wall … you failed. Do you want to try O / N again?

Again, cut and dry. You did one thing … how well did you do a job? Well, you can inspect the thing you did and find out. But you may not have the equipment to try again.

It is also quite cut and dry. At the moment, did you believe this person or not? You have no clear evidence in the game to show you that your "check" was incorrect.

Again, this depends on the situation.

Suppose you follow a trail … you cross rough terrain and lose the trail. Well, you know there is a trail and the thing you are following probably hasn't ceased to exist randomly … so you might think of going back to the last place you have saw the track and try to follow it again.

However, if you look in a clearing for signs that a deer was there and you can't find any … well, you don't actually know whether or not there was a deer there, so you can't tell the difference between "missed the signs" and "no deer here". So, again, your character does not have the ability to distinguish between "failure" and "nothing here".

A bit of additional evidence to support …

While this is not directly related to skill checks, it relates in terms of a character's ability to understand how something worked, we have this bit on the invalid spell targets from Xanathar's guide to all.

If the spell normally has no effect on a target that makes a save, the invalid target seems to have made a save, even if it did not attempt one (without implying that the target creature is actually an invalid target).

So, again … as there is no clear evidence that the target was invalid … you just perceive that the spell failed to affect them. You can't tell the difference between "They've successfully backed up" and "They're immune" in the same way that, without evidence, you can't tell the difference between "I didn't drive well enough" and "There is nothing to find."

In short … think about it realistically. If you couldn't see the result of your dice, is there a clear reason for your character to know that they failed? If so, they are right to try again. Otherwise, they cannot say that they have failed.

I'm not familiar with role playing, so please apologize if this question is poorly worded.

As an example of what I'm thinking of, let's assume the player characters are on a capsizing ship. Escaping from the sinking, they find an NPC hanging on Flotsam. Players decide that they can't save the NPC, so they let him drown. Unfortunately for them, the NPC had a critical item for the quest (for example, an artifact needed to kill the BigBadBoss later). Since the object is now permanently lost, the quest will never succeed and the BigBadBoss will kill all of the player characters. They are dead, they don't know it yet.

How can a GM continue to advance the campaign if player characters lose an intrigue item like this?

For this particular situation, I imagine that the GM could try to give the critical object to another NPC, but this might not be possible (for example, a player could have tried to examine the NPC drowning, and the GM described the NPC as having the artifact). It could also be something more serious, for example players could kill a critical NPC for the quest, and bringing the NPC back to life would be beyond belief.

I imagine that the GM could also do nothing and let the players die, but then it seems to be a rather boring game for the GM, since he already knows the end result.

How can a GM continue to advance the campaign if the player characters cause the loss / destruction of a critical item or an NPC?