This container will be used as a backup for files on my laptop.

I currently rsync the files to the server, where they live in a plaintext format.

I am looking to see if it is possible to do something along the following lines:

This would be run every 30 minutes, for example.

The complicating factor here seems to be managing a remote container, whereas I can’t visualize a flow which allows me to perform the above operations but using a local container and then just rsyncing that, as the container will be ‘open’ while the files are being worked on, and I’m looking to be able to incrementally backup the work, not just when I’m finished for the day.

Is this infeasible? Is there a better way to achieve the goal? Thanks!

I am on 11.1 Big Sur.
I have a partition with no disk identifier called (free space)
I would like to remove this, and then make the APFS container take up the free space.

Here is a screenshot of my GPT and Disks 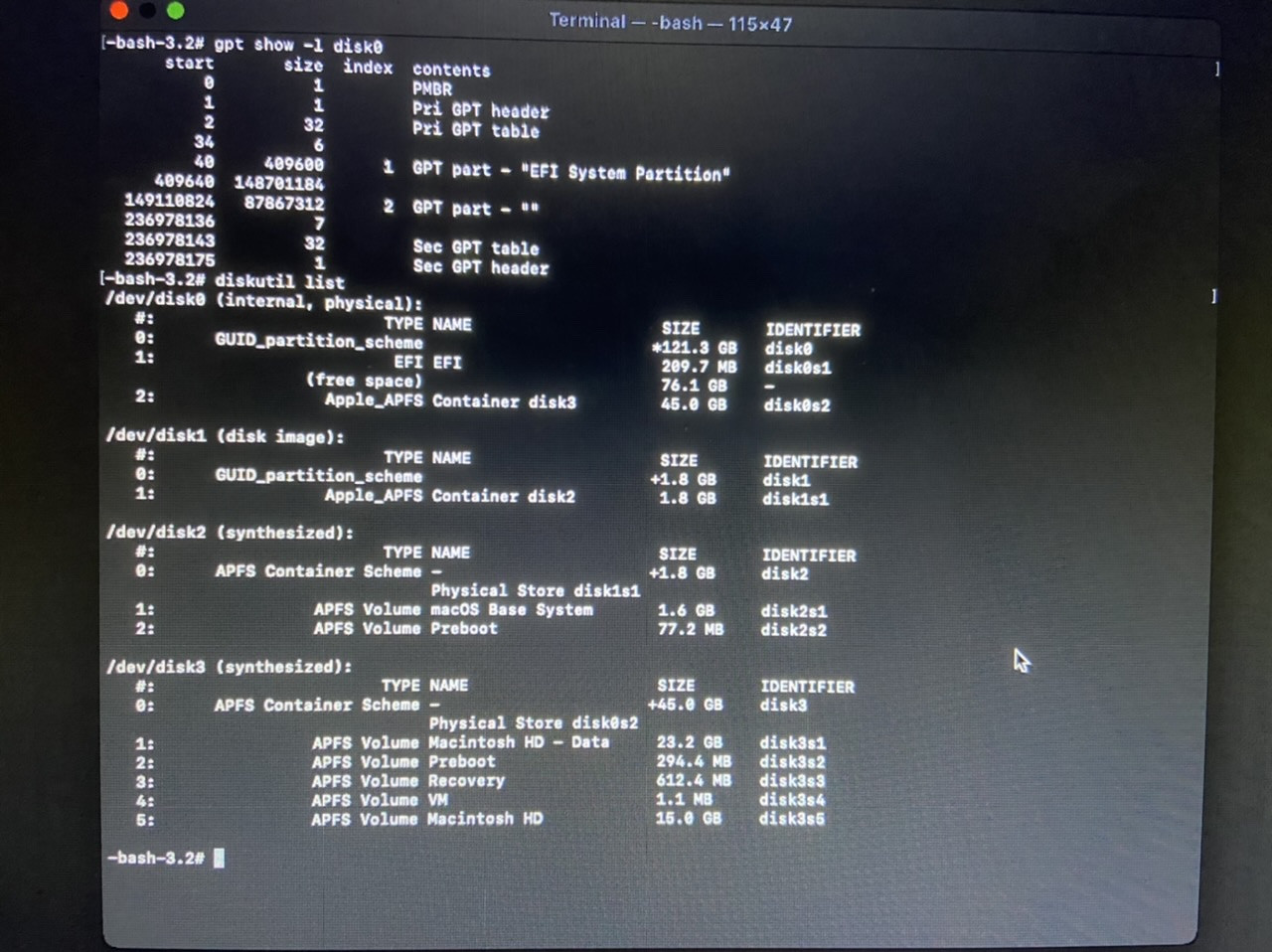 I am working on a fresh server installation of Ubuntu 20.04
I started a sample nginx by running docker run --rm -p 80:80 nginx
Port 80 appears to be open on the machine, I cant curl the nginx default page though:

From my local machine, I am unable to connect to the server. Ports are being shown as filtered:

Running the container in network mode host works as expected and I can access the nginx default page via localhost and on my local machine.
docker run --rm --network host nginx

Why is the exposing of the ports not working as expected?
How can I fix this / analyze the problem further?

We have set up a Kubernetes cluster on a set of (virtual) Linux hosts. Each host runs an internal HTTP proxy on host’s 127.0.0.1:3128. To access external HTTP/HTTPS resources from this network, the proxy must be used.

We would like to make external network accessible from within containers in the cluster. Containers running on a given host should use a HTTP(S) proxy instance from that host.

How can we make these proxy services available from within containers?

Here is the sender and handler interfaces:

So I register in IoC container a sender service implementation, which dispatches events to all the compatible IHandler<in T> implementations. I use Autofac with a contravariance source, but there could be something else:

I am using Circle CI’s aws-ecs/deploy-service-update orb to deploy my docker container by pulling the latest image in AWS ECR and deploy it in AWS ECS with AWS EC2 instance. This container is a Machine Learning model that accepts API requests at TCP port 3000(I am using fastAPI for this) and returns the predictions. After I deployed it I couldn’t send requests to the public IP of the container instance of the task that deploys the container at port 3000 (This IP is not my EC2 instance’s public IP; it only has private IP and public IP is disable).

And here are the open ports of the EC2 instance:

Here is the task with port mappings which deployed the container (to AWS ECS) that you see docker ps screenshot above: 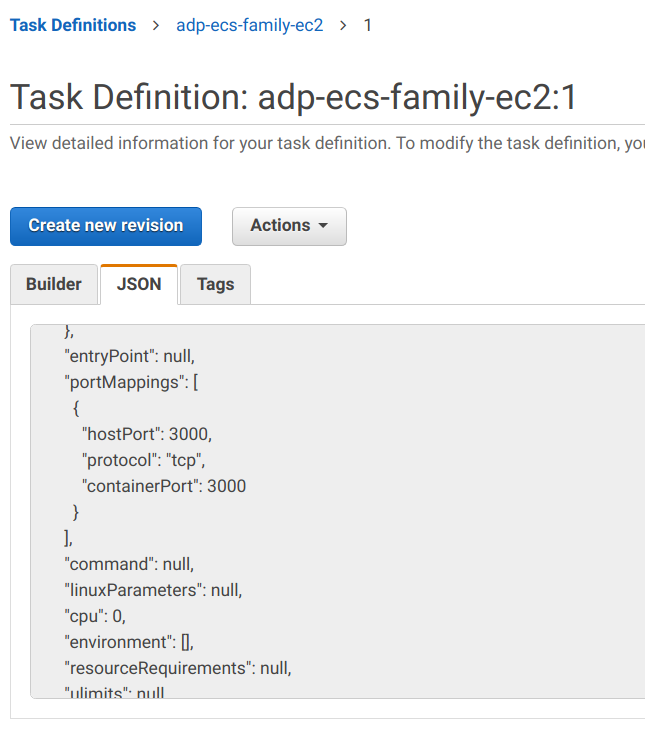 In the task definition, you can see the port mappings I have defined for the container.

Here is the task running on my EC2 instance with the task-definition shown above and the network mode I am using is ‘awsvpc’: 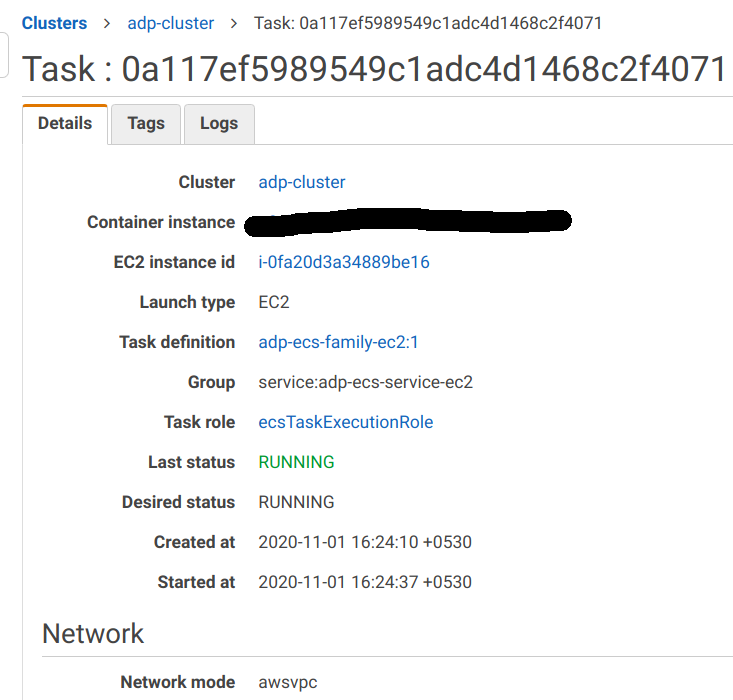 inside the EC2 machine(by SSHing from my laptop), I could send API requests and receive proper response to the container to it’s public IP, of the cluster of AWS ECS. This means that ports are being mapped only when I run the container manually.

I had no problems with ports when I used FARGATE, when I updated the service from Circle CI or even when I manually started tasks.

So, how to automatically map ports when a task is run from AWS ECS service dashboard or from Circle CI? If I run docker container manually, I will not be able to get logs automatically from AWS Cloudwatch and will not be able to stop it from AWS ECS dashboard. Another container by AWS that is running in EC2 instance will take care of those things. It will route the logs to Cloudwatch and accepts stop the existing one and start commands to start a new container with new image stored in AWS ECR, without having to SSH everytime I would want to look at logs or start/stop containers.

What has gone wrong here, which led to ports not being mapped and How do I fix it and map ports properly, so i will be able to send API requests to my container.

For testing purposes I want to build a MySQL container that has a dataset bootstrapped into it. I know that mounting is possible and that you can place sql scripts into the init directory to run the import at start, but thats not what we want. So I tried to build one myself that just copies the datafiles into the docker container.

I use the following dockerfile to build my container.

This runs succesfully so afterwards I spin up my freshly build container and during the startup something in the container will just initialize a fresh database and throw everything that I placed into /var/lib/mysql away. I checked the README that comes with the mysql container but there is nothing I can find that relates to this.

thanks in advance for taking the time to read. I will update if my post is lacking any information.

I am trying to use dnsmasq to serve dns requests from within a docker container (based on webdevops/php-apache-dev) to resolve e.g. xyz.localhost to 127.0.0.1. This is needed for the web application doing cURL requests to the domain xyz.localhost.

Here is my Dockerfile

Now, when I open a bash in the container docker exec -it my-container bash and check if dnsmasq is running:

There are symlinks to /etc/init.d/dnsmasq in every runlevel (rc0.d to rc6.d) in the same way as there are to apache and the other services that are perfectly running.
When I calling /etc/rc4.d/S01dnsmasq start manually I get the following error:

On the other hand it is no problem to run dnsmasq by entering service dnsmasq start.

What can I try to get dnsmasq started whenever I run docker up?

I know about the extra_hosts option in docker-compose or as docker parameter, but I want a general solution to resolve any request to *.localhost to the docker container itself (127.0.0.1).

I’m not a guy who has computer science related background, just curious about the container technology and of course I did some googling to see what container is.

hope this is the correct site for container related question.

Here are my questions.

I mean it stops proxying for whatever reason, not crash. it happened to me today, I had to restart it manually but I lost the error log so not sure what happened, it was working fine for months before that but I lost 6h of uptime.

I know docker has HEALTHCHECK but not sure specifically what command would be best to make sure the proxying is still working.