I am new to databases and have just started learning different techniques of Data Warehousing. I have been assigned the task of performing normalization techniques on a data set of at least 1000 rows with a minimum of three tables.

I am not able to find such data for the same.

I have tried data.world, kaggle and uci but all to no avail. Can I also perform normalization techniques using MySQL Workbench? Please help me .. Thanks in advance.

description of the problem

i have a data state space: a set of data sets, each of which can be modeled as a collection of arbitrary key-value pairs. These datasets are each a branch of the evolution of a parent dataset, forming a tree (not a network; branch of datasets but do not merge.) The root of the story tree is an empty dataset.

I'm not looking at / not exploring the entirety of this data state space. Rather, I have a list of all the leaf node datasets that exist in the real world. I only care about these leaf node data sets and (sometimes) their ancestors.

I want to find (or create!) A persistent data structure (on disk, distributed / fragmented if necessary) to store and query these data sets. I would also accept a complete database management system built around such a structure.

This data structure would require the following operations:

Constraints imposed by the data:

Consideration of the use of disk space is where things get interesting, IMHO.

Without a requirement for disk space efficiency, the naïve solution is to simply have full copies of each separate data set stored separately in their own read-indexed storage files, and then distribute sets of Separate data on their own network fragments in order to read requests can be routed to them separately.

But this naïve solution would throw the storage requirements for this state space (reminder, ~ billion KV pairs each, ~ million knots) into a territory of several petabytes, and I don't have that kind of Space.

Intuitively, thanks to my experience in tuning analytical database systems, I well disk data structure for OLAP backup storage (including all required indexes) to introduce at most 10x overhead in addition to a modified data capture representation of the source data. The modified data capture representation of all these data sets (i.e. the representations that to define above) currently stands at ~ 50 GB; So I would intuitively expect this data structure to require no more than ~ 500 GB of disk. Am I crazy to expect this?

I know I can get some easy gains in terms of storage overhead for general "deduplication" of datasets, just by relying on a file system with a copy-on-write block level, where each dataset in the state space becomes its copy-on-write snapshot and the snapshots form a tree structure. But it looks like would not evolve operationally, because either I would use a sort of sorted flat file dataset format (in which case the insertions "in the middle" of the data cause an explosion of storage in descending snapshots), or I & # 39; Would use something like a disc LSM tree (eg LevelDB) or B + tree (eg LMDB) (in which case each snapshot would add another "level" to the tree, causing either an explosion of the inodes of file in the case of LevelDB, i.e. a fragmentation of each file into tiny scopes per layer in the case of LMDB), which ultimately means that reading in a data set of one million branches in one such a store would have a lot of overhead in file system accounting.

I guess one well the data structure for this would involve, at some level:

I am aware of Datomic, which seems to have an architecture and a set of operations similar to what I am looking for; but which only supports a linear chronology, rather than a tree of chronological branches. I do not know if its architectural design could be extended to support connection time without fundamental changes.

I also know what blockchain systems (eg Ethereum) do with merkle patricia trie– storage room. I evaluated exactly that, but – at least when the blockchains themselves implement this approach – the read performance born scale for analytical workloads. (This works for these systems, since their evolutionary stages are OLTP workloads, almost always calculating against a "main branch" state – the result of the most recent previous calculation – which is therefore set almost completely hides in memory. Most recent "main branch" state can be considered "cold". None of this is true for an OLAP use case; OLAP queries examine arbitrary branches of a state space at arbitrary times, with neither branch nor node being "hot".) I would expect, however, that some modification (relaxation?) of this approach is appropriate.

We have a dataset

Find abnormal examples in the dataset.

Now i want to delete the anomalous rows received from the dataset. How can it be done?

This question was migrated from Super User because it can be answered on Web Applications Stack Exchange.
Migrated 1 hour ago.

I am trying to retrieve the latest BTC / INR price from an HTTP JSON URL from an exchange.
https://api.wazirx.com/api/v2/trades?market=btcinr

I use the following formula in Google Sheet to retrieve the latest price from the URL:

I am relatively new to Mathematica. Hoping for help to get started, as the graphics capabilities of Mathematica look promising.

I have a 5-dimensional list of numerical data generated by simulation. So i have five variables (a B C D E) and their associated numeric values.

I would like to visualize a 3D surface interpolating the data points with a, b, c like the variables to visualize, re as a color setting, and e as input for Manipulate.

Currently, the solution works very poorly when looking for these unique values ​​(we use Postgres). The use of Postgres partial indexes alleviates the performance problem, but, on large datasets (500 million rows, which is not unusual), performance is not acceptable.

One solution I am considering is to hash the attribute + value using a trigger before INSERT and UPDATE. The trigger would check this unique-index "hash" before authorizing the insert. If the hash is missing, it inserts it otherwise it blocks the operation.

Is there a better solution to this problem, given the size of the dataset?

How to normalize an image dataset? the only formatting that I know of and that I've seen some use is to divide the matrix by 255, but I don't understand why, since that only changes the scale of values.
There are several measures of the tendency for centering and dispersion, but I don't know how to apply them to images.
Note: I am facing a classification problem.

I got this type of data:

I would like to sort it effectively this way: 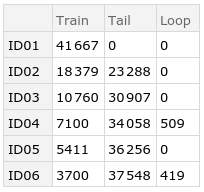 How could I do this?
Thanks in advance for your help!

I have regressed on this, but it continues to generate errors, it is a .dta (stata) file.