I have been following Bitcoin for a few years now, and I was wondering what the developers are thinking here about block size right now.

I realize that we can never evolve towards millions of transactions per second on the chain, I understand that – that's why LN etc. is under construction to also maintain the decentralization of Bitcoins while continuing to evolve. But wouldn't that also benefit the Lightning network, that more "deposits" on the chain to LN could be made in one block (imagine a few million users trying to access LN at the same time – the Bitcoins blockchain would be blocked quickly – essentially meaning no deposit in LN for a long time?).

If the block size has been increased to say 10 times (10 MB): I realize that Bitcoin node operators would start to experience problems with storing the fast growing blockchain (more centralization) – but then again , is it really necessary that everyone can execute a knot? Aren't nodes primarily used for miners and programmers?

I realize that validating your own transactions is a great thing, but should that be hindering scaling up on the chain? It is a cutting edge, but I think we have to find a balance. Either way, at 10MB we would be increasing the blockchain by 1.4GB per day, or 500GB per year (assuming the blocks are full), which is a lot. But then again, it's not unusual to see hard drives the size of a few double-digit TB these days – it seems that capacity is on an increasing trend, so maybe decentralization is possible. after all at this size? I'm really curious to hear more arguments against increasing the size of the blocks, now that a few years have passed since the big boom 🙂

But instead of his usual speech, he watches the debate and provides live commentary.

I would say yes, but there is nothing wrong with being gay. When I was born in the 1930s and I grew up in the 1940s, if you were gay, you were basically treated like a criminal. You couldn't enlist in the military, business owners would kick you out of their businesses, restaurants, restaurants, etc. and you would be left behind by society.

[ Politics ] Open question: Republicans donate to Democrat Marianne Williamson to keep her on the debate stage. Does anyone else want to put a $ to keep it? .

I do not have a TV. How can I watch the current presidential debate? How about the one hour preparation that NBC will air just before the debate?

Racism, hatred, personal abuse, fanaticism, sexism, provocation of conflict, are all that they have.

Situation:
We develop a complex information system (legal information): a lot of information, many form fields, many texts, legal information, etc.
It is used only on monitors and laptops – no mobile devices or tablets. It's quite old and now we have updated the architectural part and with it we have to make changes in the user interface.
There are about 3000-5000 users.

Ux logic problem:
Our fullstack developer himself has changed the logic of alerting and we now have an important discussion.
We have three types of alerts: success (green), warning (yellow) and error (red). (the red ones of course with validation error, etc.)
Until now, we had them displayed at the top of the screen, between the menu bar and the form. From now on, the red and yellow symbols are still displayed, but the green symbols that he moved to the snack bar are displayed in the lower left corner.
The picture is only an illustration, what kind of alerts I am talking about: 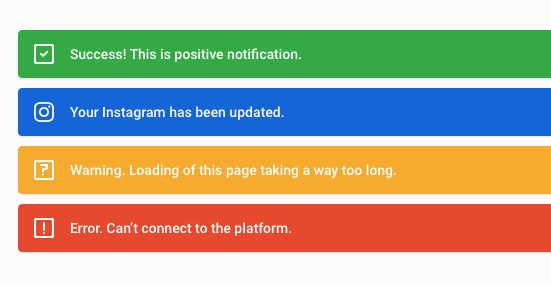 He:
He says that he made this decision (by himself) because there are no important messages and that in this way, there is less information on the upper area where there is already a lot of information.

Second, he says that these messages are not equivalent, that green is not important in reality and that it can be interesting, but that a user can live without. Unlike red and yellow, a user must see.

He says that success alerts are like global messages that do not require the attention of the user because they do not prevent the use of the system.

Me:
I can not agree with that and my argument is as follows:

Nielsen:
Finally, we both tried to argue on the basis of Nielsen's article, but it seems that we both understand differently because after reading, I did not change my mind about it. neither him.
he even had new arguments from this article:

An indicator is a means of highlighting a page element (content or part of the user interface) to inform the user that something special is attracting him. "

Notifications are informational messages that alert the user of general occurrences in a system. Unlike validation, notifications may not be directly related to user inputs, or even to the current user activity in the system, but they usually inform the user a change in system status or event that may be of interest. "

To finish:
I always have the feeling of having good arguments and that it is not correct to place success alerts in a snack bar while other alerts are elsewhere. but i do need some opinions. Maybe I see badly or that someone can give new "proofs" 🙂 Nielsen article makes things worse.

Does anyone know about ongoing debates or conventions on the use of sticky headers and footers in Web applications?

I design a screen for commercial investments. This is a complex task by nature for most users. Guide them to the next activity with an obvious CTA is quite difficult considering all that the user has to do. I experiment with a footer sticking a summary of the commercial instructions of the users with a button "Submit a trade" obvious.

Does anyone have useful links to examples of this job well done?