In the Book “Implementing Domain-Driven Design” the author suggests to implement a repository method to provide the next application-generated (not database-generated) ID. Like so:

But although I can see the point that providing IDs is somehow the responsibility of a repository, I don’t see an actual benefit of this implementation. Why not assigning the ID directly on object construction?

One could also argue that the identity is a central part of the entity itself.

But apart from this philoshophical difference, I see the benefit of creating the ID directly in the entity that no additional call to the repository is needed.

Do you see any advantage of providing the ID by the repository?

I am facing sort of a mental block while redesigning a new UI at my Job. The previous UI was not user friendly and we received a lot of feedback to make it better. Now, finally after 2 years our team has decided to revisit the UI and make it better.

I mocked out a few proposals but all were heavily influenced by our existing UI and so I never showed them to my team. I am stuck and cannot think past the existing UI design we have. I feel like I am not getting anywhere and cant come up with anything new.

So any suggestion or advice would be helpful.

Mapping (that user should be able to define):

Note how all the nodes of Bucket C are eventually mapped to some node form source buckets. 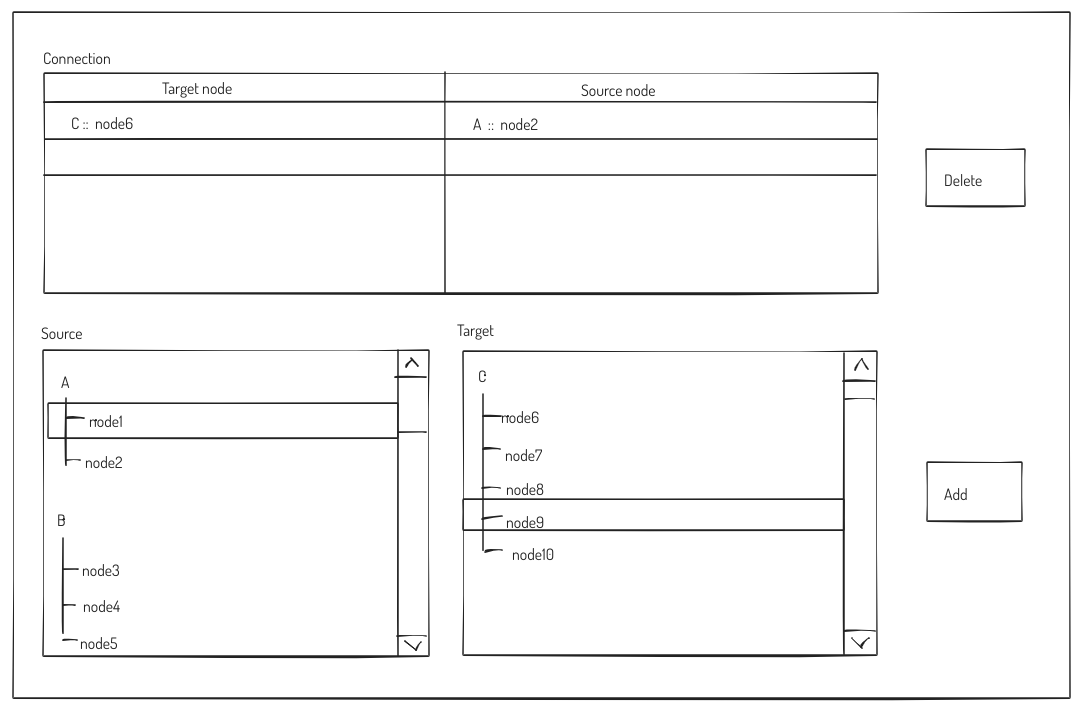 I am not sure, what would a nice and simple way to allow users to define this mapping?

I do not want to talk about current design much but just that we are using tables to display this mapping in the UI. The buttons that a user presses to define individual mappings are outside of tables.

Any better way to define and visualize these mappings? Any resource I can look at?

Hello Everyone.
I need a logo design for my service/consultation.
The logo will be used on the website and in mobile app.

Service name & domain: cyber_esilience DOT net (remove the underline, note: the R is shared between Cyber and the other word so its good idea to Have it capitalized or something)

Winner will receive the payment through PayPal.

Mostly in all routers and operating systems the Longest Prefix Match algorithm is used for searching the trie of IPv4 addresses.
Packet filters like Iptables don’t need some special data structure for finding IPv4 addresses.

I need to implement some data structure, where I could efficiently (log(N)) find IPv4 addresses, which are specified in firewall rules. But there could also be IPv4 address ranges. These ranges could be intersected and have exclusions (exclude one range or IP from another one). But I thing exclusions could be resolved in time of constructing (deploying) data structure.
So the Longest Prefix Match doesn’t fit.
I was considering the Interval Tree but I’m not sure that this is the most effective way.

P.S. inserting and deleting is not a big problem but it would be good to be also log(N)

I was thinking about a simple fund transaction from one user to another. All users will be on one table and transactons on another table. But could not figure out what is the efficient way to show a user‘s all (send & received) transactions in one row.

Am learning with Express and Postgres. Thanks ❤

I want to create a stream class The input stream should read/parse a continuous range from left to right providing convenience methods. The implementation isn’t a problem but choosing a consistence API.

A basic example would be:

I also want to support an operation known as read until to read the input stream until a specific string occurs. On first glance, this doesn’t sound very problematic but if you take a closer look there are 3 possible outcomes:

I want to support all 3 variants with 3 different functions which should be unambiguous to the reader but it is really hard to explain what actually happen. Here are my ideas:

• read_until_include(cmp) – process the cmp and returns the part before + cmp

• read_until_exclude(cmp) – process the cmp but returns only the part before

I am not a big fan of my own idea. Could anyone please give me an advice where to go from here?

Use-case:
When an arbitrarily user is clicked his/her profile is loaded and shown.
The profile includes a list of polls created by the clicked user.

Which of the following api calls is the proper usage of such a use-case?

Between The Lines:
I currently have a UserController & a PollController.

UserController has functions related to the user, handles api calls starting with /api/users/…

I am trying to figure out which controller should handle the request to get polls by a user.

I am working on card which has a clickable link/ clickable options but the card itself is not clickable. I want to add a shadow to the card when someone is hovering on/ clicking on the link. I have read in many posts that only when something is clickable, we should put a hover action on. Does it seem like a good interaction pattern? 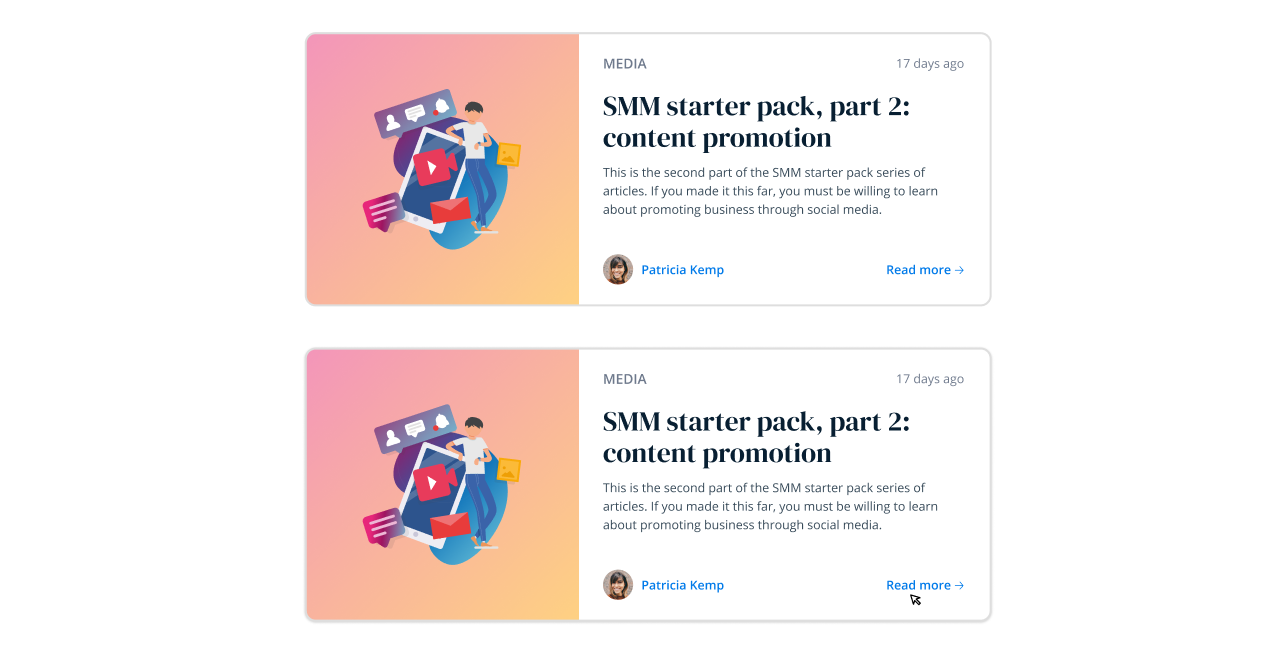 Database systems generally don’t have fixed overheads – for instance, a table or index can be loaded from disk on demand or stored in RAM, with the same result but different performance. As such, many database systems are designed to make maximum use of available resources – they will claim as much RAM as allowed from the OS in advance and manage it internally, and assume they can use whatever CPU cores exist.

That strategy means they don’t “play nicely” with other applications on the same instance, particularly those with unpredictable resource needs. You can set a limit for what the database preallocates, but set it too low and you waste resources, set it too high and your other applications can’t deal with short bursts in demand.

Running two instances frees you from worrying about that conflict, and lets you pick appropriate resources for each part.