I have a sheet with dynamic values entered by a team. These data can change daily (deleted or changed or added more data) like list of names who are willing to participate in an event. I want to make a separate sheet or tab that will query or list all the data that were entered and not to disappear even if they were deleted later by the team.
Lets say Tab A is Data_Entry
and Tab B is my admin sheet that contains all data entered.

I am creating a network with three layers. A sender layer, A gateway layer, and a Receiver layer; each having different platforms. See diagram below 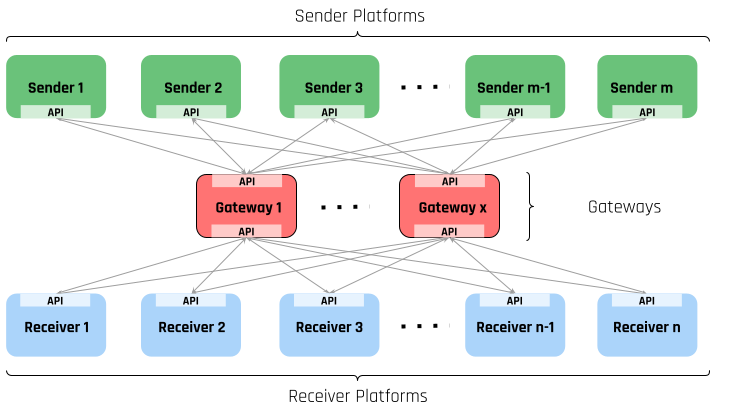 All platforms have published their public keys on a trusted public database server (not shown on the diagram).

A sender S wants to send a message to the receiver layer but it can only send the message via one of the platforms in the Gateway layer. Let’s call it G.

The message contains a public section that can be accessed by anyone and a private section that should be accessible only by the receiver layer. Something like below

Every time S sends a message to G; G uses the public section of the message to verify the authenticity of the sender and to identify a subset of Receivers { R1, R2 … Rp } where p <= n; and broadcasts the message to the “p” receivers.

Some additional forces that exist are as follows:

To clarify, this machine T′ with the fixed output for all inputs is a Turing machine? – Shashank V M

@ShashankVM, Yes, T′ is a Turing machine. – D.W.♦ (When can a deterministic finite-state-automata (DFSA) along with its input sequence be said to be a part of another DFSA?)

From what I understand, a machine with fixed output for all inputs is a Turing machine.

Consider this thought experiment, I have a “machine” which is a wall with a slit through which I can pass a tape in. The “output” of this machine is on the wall, i.e. it is painted on the wall as a fixed string $S$, which for the purpose of this experiment is “Hello”. So no matter what is written on the tape, the output of this “machine” is “Hello”. From what I understand this “machine” is a Turing machine.

Is my understanding correct or am I missing something?

Because I find it hard to believe that this wall with a slit can be considered a Turing machine, when a supercomputer is considered a Deterministic Finite State Automaton.

Also I cannot see how this “machine” can emulate any another Turing machine or do any useful computation.

I’ve got a edit form in which the user can change a number of properties from an item. In certain conditions, there is an optional time field which the user can set. But it cannot be set to an actual value in the UI, the user can only specify that it must be set to ‘Now’ (a backend then later in the process will determine what ‘Now’ actually is with margins and so).

I am looking for a good design for this. Of course I can use a checkbox with “Use current time” or something, but that looks weird in this case.

What I’ve come up with is this:
(real form and design is very different and specific, mockup just to show the idea):

The optional field here is ‘Due time’. When it’s present and has no value, the ‘Due time’ header is shown with a grey ‘Unknown’ value below. A ‘Now’ button can be pressed and that changes the value to ‘Now’ after which the button disappears. User can Update the rest of the item or Cancel it by using the form buttons. We’ve got a Now/Clock icon and button in some other places in our app, so that might be familiar to the user.

What do you guys think? Is this a weird interaction? If don’t think I see this much so I am doubting.

I’m working on a scrolling arcade shooter in C++ with SDL2 and I’d like to have a replay function so players can save, share, and replay good runs. I understand that floating point math is not consistent from CPU to CPU, so saving inputs with frame counters won’t give you stable replays. I saw someone mention that fixed point math is a possible solution, so I’m currently working on a C++ engine using Libfixmath fix16_t datatypes in place of anything that would be a floating point.

Should this give me 100% deterministic replays across hardware if I save the random seed? From my understanding of how a fixed point math library works that should be the case, but I would like some confirmation before I bank my entire engine around this. Really my only concern is that I’m using literal floats to set the starting values for some things, like fix16_from_float(1.2) to set the player’s movement speed and I’m not entirely sure if CPU inconsistency could mess up that initial value and thus defeat the purpose. If so, could I solve the problem by using fix16_from_int() paired with some Libfixmath arithmetic to get the same non-integer values without ever using floats? I don’t quite have a complete grasp on how literals are stored into a compiled program.

I am also a tad worried about performance with potentially hundreds of onscreen bullets using high level fixed point math every frame, but I’ll have to see how much impact that has when I get to it.

The State of httpd_can_network_relay is set to on. However the Default is set to off.

However when I attempt to set the default to on I get an error. I’m not sure how to approach this.

Note:
All repos are up to date with dnf.

Let $T:S^3rightarrow S^3$ be an isometry of finite order. Then the set $S^T={xin S^3|Tx=x}$ of fixed points is either empty, or a pair of antipodal points, or a great circle, or a great sphere.

Is there a reference for this in some well-known textbook or paper? Thanks in advance!

Edit: Having received a couple of answers containing proofs, I would like to clarify that I know proofs for this and I am specifically looking for a source which can be cited instead of providing a proof (due to space considerations). This question is literally a reference request.

Does anybody know if there’s a Discord or a website or a forum where folks discuss Fixed Cam 3D games in detail? I’m really not into Facebook, so ideally I’m not looking for a FB page, etc.

I’m just really curious to know if there’s somewhere people discuss or debate those games – they’re not exactly common and they’re often made in the survival horror genre, but I think they offer some interesting challenges in both cinematography and interaction design, while also offering a particular visual language for creators.