In fact, you want to update social media most often outside of work hours, usually between 5 and 8 a.m. and then again in the evening when people are out of work until 8 or 9 p.m. hours. This seems to be the case when most people visit various social media platforms, so it is more likely to reach more people during these times. This does not mean that you should not share content during the working day, but the things that you do (especially articles like articles) that you may want to share again during any of these other periods. 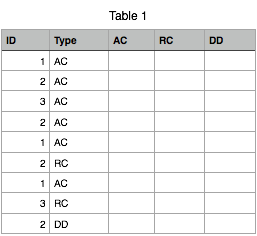 Using the following line, I can generate an account of each "type" value but I don't know how to iterate over each unique "ID" and then add the number of "types" to the new columns.

I want a heat card that takes the postal codes as input. From a quick search, it looks like the zip code package is out of date. Are there any other solutions?

I wanted to know if there is a way to get a list of data in Excel if I have a frequency table, for example:

I can't think or know anything with Excel.

Greetings and thanks in advance!

My teacher told me to optimize my Perl code, but he did not say what exactly – just to simplify it.

I've changed a few things but nothing major. Am I missing something?

Perl program that allows the user to simulate simultaneously
throw of several cubes. The result of the simulation is then a total
number of points, which is the sum of the numbers of the results of the eyes
in single throw. If several of these throws are executed with more than one
cubes, the frequency distribution for the total number of eyes is
calculated. This frequency distribution must be in the console
window in the form of a table and a simple summary table.

At the beginning, the following entries must be requested by the
user:

The frequency distribution for the total number of eye sets must be
displayed in two different ways:

I have been scratching my head for a few days, trying to find a solution to the next problem we are facing.

In our data center, we have an F5 running on BigIP hardware that serves as a single point of entry for HTTPS requests from client computers in our various offices across the country. F5 terminates TLS and then passes all requests to two Traefik load balancers, which route them to the different service instances (Traefik nodes run in Docker under Red Hat Enterprise, but I do not think that this n & # 39; Does not affect my problem). From the point of view of throughput, processor and memory, these three network components are more than capable of managing the number of requests and the traffic with a considerable capacity to save.

However, we found frequent delays of 1000 ms in client HTTP (S) requests, especially during periods of high load. We followed the problem to the following root cause:

Obviously, these delays of 1000 ms are absolutely unacceptable. We have therefore considered the following solutions up to now:

I'm going to throw # 1 because it's just a band-aid. Delays still occur, just a little less noticeable. No. 3 would have no effect, No. 4 would probably make the system non-functional. This leaves the n ° 2 and n ° 5.

But based on what I've learned after reading dozens of posts and technical articles, the two will only end up by reduce the chance of these "collisions". Because, which ultimately prevents the sender, F5, from randomly choosing (pseudo) a combination of ephemeral port, source address, and target port that still exists in the TIME_WAIT state on the targeted Traefik host, whatever the brevity of the end_timeout parameter should stay in the range of several seconds anyway)? We would only want to reduce the risk of collision, not eliminate it.

After all my research and at the time of gigantic Web applications, it really surprises me that this problem is not further discussed on the Web (and available solutions). I would really appreciate your thoughts and ideas to find out if there is a better and more systematic solution on PCT lands that will lead to the occurrence of nearly zero collisions. I'm thinking of a TCP configuration that will allow the Traefik host to immediately accept a new connection, even if an old connection was in the TIME_WAIT state. But from now on, no chance to find that.

What is the correct frequency to set to check links again on a project?
Currently, I do not double check. I've changed that some time ago to be so, and I was doing all this manually via the menu led by Recheck. I have too many individual projects now to do it. It was a bad idea!
Sooooo..I have not checked again for a while. So, I build links to nowhere. Waste of resources and time.
What are the considerations for the time interval I choose?
There should not be a single "best answer", I would say, if it is possible for the user to change this setting.
Nothing in this SER software is a lost feature, I realize …
I attended 1and1.com today, with whom I registered an unusual TLD last year, as it was the first company I found. to offer it.

Thinking that the name of my "support specialist" looked like a kind of phishing, so we decided to run it via Google.

Here is what I found:

1 & 1 is positioned as "the largest web host in Europe" … and they literally pay $ 4 / hour in the Philippines to manage their service desk?

Is this a common practice in the industry?

Maybe there is a list of companies that outsource their support to low pay bases that I can avoid?

I can understand why companies are tempted to reduce the cost of their helpdesk teams.

But hiring Upwork freelancers at $ 4 at the time seems to me to be very unprofessional.

I would say it depends on what you are trying to do on Twitter, but in my work, for example, we apply about 4 to 6 rules a day on Twitter, if possible, some days with more and others less. I personally try to keep it to five; I like to work according to the rule of 80% informative, 20% can give rise to an action, so that five facilitate the monitoring of my weak brain!