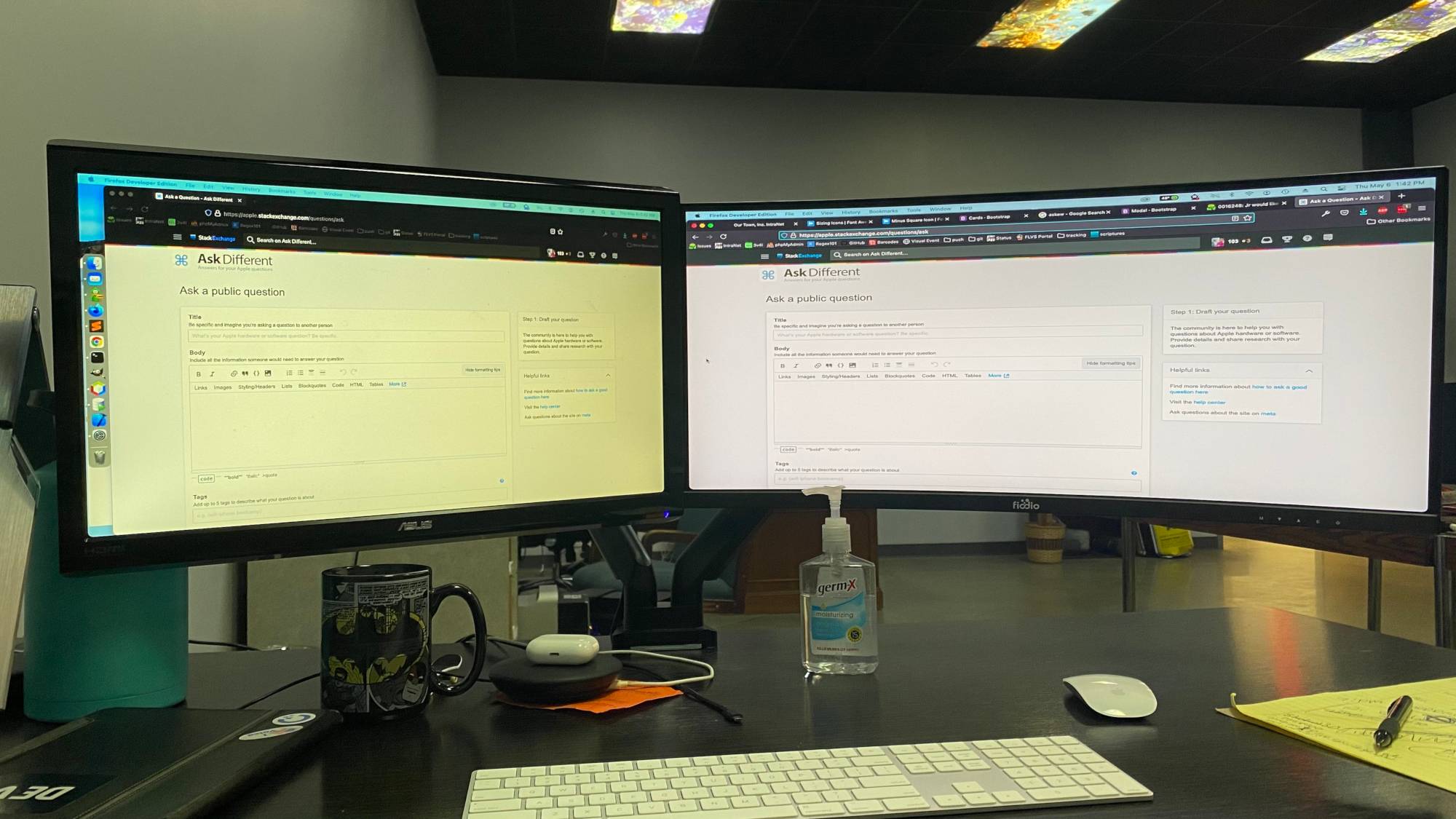 The photo and the title pretty much say it all. I’ve played with all the display settings on both the Mac and the new monitor but it continues to show the display stretched instead of adding more screen real-estate.

It does appear normal if I unplug the smaller screen on the left.

How do I fix this? It’s hurting my eyes?

if i have 8 SATA3 SSD, for shared hosting,
i want to run cloudlinux and cpanel on it.

compare hardware raid card with mdadm raid10,
do… | Read the rest of https://www.webhostingtalk.com/showthread.php?t=1845416&goto=newpost

my phone is a Motorola G5S+, with a custom ROM installed (you’ll understand later why that is not of much relevance). Randomly, after my screen goes off (and granted that the phone isn’t actively doing anything like a call) the whole phone stops responding. That includes the power/volume buttons, fingerprint scanner, every gesture (like shaking to turn on/off the flashlight) and even the usb port (charging it or connecting to a computer does nothing, the computer doesn’t even detect the phone).

This started happening after I updated a custom ROM (PE11 March to PE11 April) (not the first time I installed it from scratch, but the first time I received an update) but, after installing several different ROMs over the past week, I highly doubt it’s a software problem.

The reason why I switched ROMs the first time was because, after this problem appearing a few times (note: this happens once or twice a day), the last time I had to force reset the phone by holding the power button for a few secs, after the reset the OS, or the UI at least, was dead. The phone screen did turn on, although it was a black screen, all buttons and gestures worked except for the fingerprint scanner and the phone was charging (or at least it was doing the sound it does when you plug it in).

That led me to go in a ROM-switching frenzy, but as you might’ve guessed, the problem kept appearing. I even went back to the first ROM (PE11 March update) wherein this problem had not yet occurred but, of course, now it did happen.

I wanna point out two things:

that my usb cable is not working properly and hasn’t been for a while now, but this is much more recent than my defective USB, but one of my theories is that this is an electrical problem, but I hope it’s not.

that when the phone is unresponsive, it is NOT turned off. I know this since the first time this problem arised, my flashlight was on and it didn’t turn off (nor could I until after I had forced the phone to reset). Also because it takes a lot longer for the screen to turn back on after it dies, meaning that the phone is “waiting” for me to hold the power button for long enough.

We were all newbs at the beginning, and did things the wrong way.
My partner and I bought crypto separately with our own exchange accounts, but transferred our hodl coins to a single shared hardward wallet address.
Using Koinly, we can easily determine which transaction in is for which (only 15-20 or so)
Problem/challenge is, how will this work when i transfer the coins out using FIFO, LIFO. We Koinly know which “coins” are which?
I have never actually transferred out from the hardware wallet, and i want to fix this.
I thought about transferring all coins out to our respective exchanges (at the same time), then back into new separate wallets. Will this work and be cool to the ATO?

Second question. Can you have a share wallet address for a masternode and split payouts/cost by the % coin holdings.

Ok so I just got this phone brand new off cricket around the middle of January this year. This phone has a 4gb RAM processor and runs Android 10. Anyways whenever I play music, and open a different app, the music I’m playing always stops a couple of seconds afterwards, and the notification for it just disappears. I’ve tried using multiple other music player apps and the same thing happens with each of them. Even Spotify and YouTube music. I can provide a screen recording if needed.

The music player could literally be the only tab open, and as soon as I open even something as simple as the calculator app, the music player will just crash each time. I have no clue why it does this, it’s not the headphones, and it’s just ridiculous I mean I’ve never had this issue with any other phones before and I’ve used crappy obama phones from 2014. Thanks in advanced people. :]

I have been trying to take photos of the sunrise. In my arsenal I have ND8-ND100 filters and each time I tried a different iteration. My thinking was that with an ND filter I would be able to get well defined edges of the sun. What I mean by this is a circle with crisp edges as opposed to a globulous orb.

Unfortunately, even with my ND100 filter, the result was a globulous orb with washed out features that in no way resembled a circle. In terms of post/color grading, I don’t think much can be done since the whites are so harmful to the original information. Then again, I would like to come right out and say I’m not a color-grading expert.

I realize cameras don’t handle scenes with huge differences in brightness well, but, with that in mind, what is the best hardware setup for this task and how might I configure my camera settings to give the shot its best chance at success?

The target language for hardware is C++11, while I want to be able to use C++17 features when using simulation specific interfaces and implementations.

What would be the best way to layout such a system. I’m thinking about design choices like

Memory is not a hardware bottleneck.

I want to demonstrate how to use NBitcoin or the most simple C# function to collect transactions for use in a block, and then sign that block, and submit it into the Bitcoin-QT network client on the RPC port?

I want to demonstrate how this is done on low powered devices.

I’ve had this MacBook Pro (16-inch, 2019) for a while now, but today it glitched out with huge green fields in all apps.

After a reboot I see this checkered black/green glitch pattern in Google Chrome on some sites, in some “sizes”. Basically if I resize the browser window the glitch goes away, but if I resize it too much it comes back.

Happens both on the internal and on external display.

I am hoping this is a software glitch, but I am afraid it’s my graphics card. Would be very grateful if someone knows the answer.

Here’s the stackoverflow logo with the glitch: