I wanted to go back to US for short visits, but I’m hesitant to apply for a visa since I am not sure if I have a 10 year ban or not.

My cousin is currently stuck in the UK as he was meant to be in the UK only for transit to continue to Bosnia. The travel procedure was meant to be Bahamas -> London -> Bosnia. He has been put in a hotel here in London and he doesn’t have a visa for the UK.

He has a right to be in France due to schengen. My question is would he be allowed to leave the country into France via car (euro tunnel/ferry) with myself a British citizen?

It seems simple at first: if we have 4 functions to be controlled for a specific button, we could just have a list of checkboxes:

This will turn functions 2 and 3 on, and functions 1 and 4 off, on the press of the button.

However, we would like to have a possibility to not touch a specific function. For example, we want the user to be able to specify the following: “turn on function 1, turn off function 2, and leave the others as they were” (because they might have been activated by another button and we don’t want to undo that).

I fear that an undetermined (tri-state) checkbox won’t be clear enough:

We want to clearly indicate that it’s a “turn on” command, a “turn off” command, or there is no command.

Another straightforward way would be to use drop-down lists: 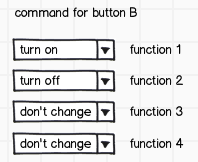 The problem with this is that the vast majority of the userbase is not computer-savvy at all, and might get confused. Checkboxes in the first example were so simple…

But having two checkboxes per row (one for “affect this function?” and the next for the actual command, which is greyed out if the first is unchecked), would be even more confusing.

I work for walmart, sometimes I do not respect the schedule, leave before the hour, 1 hour, 30 min advance

Phoog’s answer is correct for normal times. However, in August 2020 Europe might still have some kinds of Covid-19 type restrictions. As of May, if that is the case and which restrictions will be in place in August is anyone’s guess.

In normal times, you would only have to establish your identity with the airline at some point during check in or boarding for which the Argentinian passport should be enough – as would a Spanish national ID card (it is not the airline’s duty to check whether you are legally in the country based on stamps and visas afaik). An expired Spanish passport might also work. You would not encounter any immigration officers along the way and airport security would only need your boarding pass.

In Covid-19 times, any of the three countries you would be touching (Sweden, Denmark and Spain) may have installed temporary border controls conducted by police or immigration officers. If you do, your Argentinian passport will likely raise the wrong kind of questions such as ‘Where is the entry stamp?’, ‘How long have you been in Sweden?’ and ‘Where is your visa?’ You will want to avoid that at all costs. This only leaves the Spanish passport or a Spanish ID card.

As crossing an internal Schengen border still requires carrying a valid ID document (even if it doesn’t have to be shown), an expired Spanish passport might raise questions as it does not unambiguously show Spanish citizenship. However, officers might still exercise goodwill, especially if the passport is recently expired and since you are using it to travel back to Spain (that does not work for the return leg, though).

I personally would not feel safe using any of these almost options. There are still over two months until August which should be sufficient to renew your Spanish passport. In the absence of a Spanish ID card (and if it is not possible to acquire one in time), renewing the passport would be my method of choice.

So, I am in a long distance relationship with a guy from England, we have been together for a little over a year now. He visited me here in the United States for 2 weeks in April 2018, and I visited him for 2 weeks in October-November 2018. My goal is to come back to see him in a few months after saving some money. Money, however, I hope to stay for just over 2 weeks, let's say more like a month.

But I'm honestly not sure if my boss gives me a month off to visit him, so I try to quit my job to go see him and just take the opportunity to look for a better job once I get home me. Obviously, I understand that having no job as a home attache is frowned upon, so I guess I hope you can give me advice on some of my options when it comes to being able to see it without causing a lot of border control.

I have read about some people advising to lie a little bit about my reason for being there and so on and I have absolutely no interest in lying. Do you all think that this would raise too many questions for me to go visit him for a month with sufficient funds but unemployed? He is employed and would also help with some of the financial burdens and we are discussing a weeklong trip to London if I get the chance to stay for a whole month, would have proof of would accommodation there help me all or not?

I'm sorry if I seem stupid for my questions; I just know I miss him terribly and I'm ready to visit him again, but I want to get it right. Thanks guys for any input in advance!

So, I'm a new DM, it's my first time. One of the campaign players really wants his character to leave the group overnight or even while he is in a city; and go alone. I told her that she could do what she wanted, but in silence I panic; because I don't really know what to do.

To my knowledge, thanks to the uncomfortably lax US privacy laws, immigration officials are allowed to ask you to let them search your phone. If you have unlocked fingerprints, they can just force you, but if it's a password, you can refuse. Naturally, if you refuse, you will probably not be admitted. Is it possible to go back without having a permanent black mark on your file? For example. pay for your own plane tickets and go home without a technical refusal there? Or will you have to accept your phone search if you want to have a chance to return to the United States (or even in the other five eyes)?

My wife and I live in a big American city (Chicago) and plan to leave for the moment to stay with the family in a rural area a few hours. Our main reasons for this are security, as some of the reactions to toilet paper / groceries are weak, which makes us both very concerned about the type of civil unrest that could occur in the coming weeks.

Our thoughts on why it would be good to go:

Possible reasons to stay where we are:

I would like to know if there are any official recommendations on discouraging / banning this type of travel, or even unofficial reasons why one option might be better than the other. Please let me know if it belongs to another network or if I need to add / remove something.

Thank you for the advice, you have made us all reconsider and we will remain so as not to risk broadcasting anything.