as in title I’m trying to setup several webapps (nextcloud, roundcube) on one domain, let’s say example.com, without using cname subdomains. I installed webapps in default location /usr/share/webapps/ and I want this directory to be also my webroot server. How can I achieve effect like this:

using (if possible) several nginx configurations file? For example, nginx config for nextcloud contains few server blocks while roundcube config from archwiki (server is running Arch Linux) is all written in one location block. How should look nginx configuration to make all this working and with option to easily add new webapps?

I’m new to Pathfinder and started it with my group on roll20 due to Corona. I have decade long gm experience in in games like DSA (Das Schwarze Auge) and Shadowrun but not for Dungeon Crawlers.

Long story short: We are playing the Fall of Plaguestone module and my group (Rogue, Sorcerer, Paladin and Priest) needed hard intervention from my part as not to die on multiple encounters. Since I still need to get a feel for the difficulty I’m not changing anything from the module and play it by the letter.

The bear guarding the medicine bushes in Plaguestone, the wolfs in the tree-root-cave (no ranged attacks possible), the battle against the animals & minders at the pen (because of unlucky dice) and the fight against the blood-slime.

Enemies are totally able to one-hit my players with a critical hit and I feel the only reason they survive at all are the mighty resurrection possibilities of the priest (the 3 action heal). I’m looking for advice how to make the adventure more fun by not obviously saving my group, but also for other opinions on how difficult that module is.

The priest and the paladin are level 2, the others level 1. The others will level up after the next encounter as there is only a small XP difference.

I feel like the group struggles as a whole but the rogue is the weakest member in battle. The last fight (against the blood slime) was a total loss that had nothing to do with crits. In other fights I would say the crits are the problem but I’m not saying the dice are against my players.

I have a document library. And I wrote a query in the search that brought only the documents in this list. But in addition, I want a column-bound search in this list.

**There is a document library as shown in this example.

In the searches on the page, I only provide the fetching of these documents with a query.

However, I would like to search by column C for example.**

How can i do this?
Thanks.

We have a lot of applications with their dependencies including ssis packages, sql scripts and other applications. other side, we have a lot of customers with diffrent conditions and statements.
our application have diffrent stack (java, .net core, python, web application, console and …) we deployed specific version of our applications for the customer based on their conditions. but for now, we have many challange to manage these issues.
many times we forget dependencies of specific application and we dont know how to migrate from specific version to another version.
is there any tools like maven and nuget? but for our objects (applications, ssis packages, or sql scripts). or maybe some approach!

For example, in the Body field there is a LABEL with the following values:

And there is FORMAT with such values:

I am having an eCommerce website developed on Magento 2. Want to implement the best CMS system to manage content.

and I set TargetFramework like below in order to let applications based on .Net Framework to use it:

My question is, when I want to use this package in Windows form application it downloads Microsoft.AspNetCore.Mvc.Abstractions and its dependency which is not required for this type of projects. 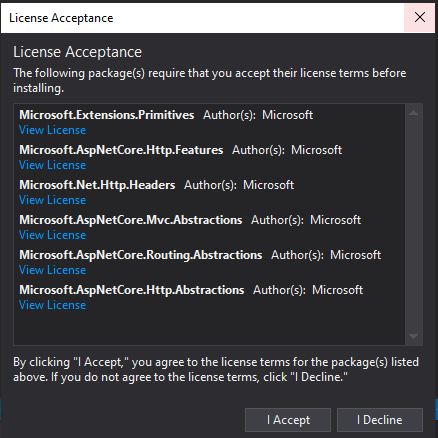 Is there a way to handle this ? or Have I done it right ?

I work at the department responsible for IT-system support to Economy, HR, Communications and other internal functions. We already have one generic virtual assistant that currently only can answer questions. We hope that the furture will bring support for virtual assistans within the systems. Many of our system vendors (UBW, ServiceNow etc) offer their own virtual assistants.

My gut instinct tells me that we should try to “drive” the system specific assistants with our current generic assistant. One way in for our customers, but then integration and coordination behind the scene.

This may be a silly question but I recently created an azure sql database and I need to check the backup policy but I cannot find the option manage backups that the documentation shows as you can see in the next picture:

and this is how the blade of my database look like

Am I missing something?