Giant Killer. When a Large or larger creature within 5 feet of you hits or misses with an attack, you can use your reaction to attack that creature immediately after its attack, provided that you can see the creature.

If the mounted creature hits you, it is Medium, so does not provoke this Giant Killer attack, even though it is mounted and the mount is Large. If the mount attacks you, then you will be able to use Giant Killer.

I mount my time machine disk from another Mac via AFP. This worked very nicely until I installed catalina, at which point I got permission errors when I tried to access the volumes in the sharing dialogue:

On the machine where the disk is physically attached I have ended up giving read/write access to “everyone” but this makes no difference.

I have to same problem on two different machines.

I can’t find any relevant entries in the logs.

Any thoughts about fixing this (or diagnosing where the problem is ) most welcome.

I have been working around this by physically moving the USB cable that attaches the disks.

The mounted combatant feat (PHB 168) allows someone to “force an attack targeted at your mount to target you instead.”

Suppose I am playing on a grid. Let E be enemies without reach/ranged weapons. M be the spaces a large mount occupies. And R be the space I occupy while riding the mount.

What happens when I redirect an attack with mounted combatant but I am outside the reach of their weapon on a grid?

This is similar to May I hold the DSLR in part by the hotshoe flash? but I’m asking about top handle is it safe to hold camera that may weight more then 2kg with this? I have two lenses one is ~1.8kg and the other is little big more then 2kg. If it matter I have Nikon d750 DSLR. 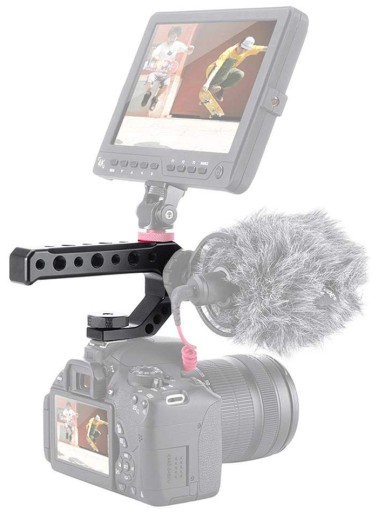 Unfortunately, the benefit of the feat Veiled Moon Style, in part, says, “Whenever you move, you can treat up to 10 feet of that movement as teleportation” (Path of War Expanded 86), and Combat on Mounted Combat on Mounts in Combat, in part, says, “Your mount acts on your initiative count as you direct it. You move at its speed, but the mount uses its action to move.”

In other words, when a mount that has aboard a rider that possesses the feat Veiled Moon Style moves, the mount moves and the rider moves, too, but only the rider can treat up to 10 ft. of that movement as teleportation not the rider and the mount.

Whenever an omen rider is mounted and uses a maneuver with a movement component (such as making a charge attack, or taking an extra move action), the omen rider can have her spectral steed make the appropriate move action in her place. (24–5)

…And, sadly, the benefit of the feat Veiled Moon Style just isn’t a maneuver.

(A creature can’t typically attend a second creature so as to count that second creature among the first creature’s possessions. The benefits of attendance are usually limited to objects—see, for example, here.)

Still, it seems legit to allow the rider to employ the benefit of the feat Veiled Moon Style while astride a mount so that the rider alone can count 10 ft. of the mount’s movement as teleportation.

For example, a Medium rider that’s astride her Large mount could enter a typical Medium foe’s threatened area, then—before traveling to the next square past the foe—the rider opts to treat the next 10 ft. of movement that the mount travels as teleportation. She winks out, the now-riderless mount continues moving past the foe, then it moves out of the foe’s threatened area, then, finally, she winks back in once the mount’s beyond the foe’s reach.

In this way, the foe would be unable to make an attack of opportunity against the rider for the not!rider’s 10 ft. movement while not!aboard her mount. (The foe could still attack the mount, though!)

To be clear, I was really hoping the answer to this question would turn out to be yes because I thought that would be really cool. (I suspect you probably thought so, too, or else you wouldn’t’ve asked.) With that in mind, this reader suspects that in many campaigns a GM could make a house rule that allows the benefits of the feat Veiled Moon Style to extend also to a rider’s mount without endangering game balance. That is, while the Path of War material is awesome and comparatively powerful, mounted combat usually isn’t powerful. In fact, mounted combat is kind of an underdetailed mess (see here and here and even here, for example), so making mounted combat slightly better is kind of okay.

You can force an attack targeted at your mount to target you instead.

This does not provide any qualifications such as “… if it can reach you.” or “…if the attacker can see you,” etc. The feat says you may redirect the attack, full stop.

Mechanically, this makes sense. Imagine a humanoid mounted on a dragon or something so large that the humanoid would never be within reach from a melee attack from any direction but directly above. Such a mount would mean the second bullet point of the Mounted Combatant feat would almost never be usable.

I think it’s important to point out that the rider has the agency to redirect the attack. It is not a case like the spell Sanctuary where the attacking creature has to save against some sort of an effect. Nor does it work like Cavalier Fighter’s Unwaivering Mark or Ancestral Guardian Barbarian’s Ancestral Protectors where the attacker is incentivized (but not mandated) to choose a specific target.

The text doesn’t provide any sort of narrative description to help describe how this feature manifests but what it seems to be attempting to simulate is the rider’s ability to shift her position in the saddle to place a part of her body in the way of the incoming blow. I say “shift” because no movement is spent as a part of this feature.

At the core of D&D 5th edition is what is colloquially called “Rule Zero” which grants the DM the power and responsibility to be the final arbiter at the table. It’s found in the intro to the DMG:

The D&D rules help you and the other players have a good time, but the rules aren’t in charge. You’re the DM, and you are in charge of the game.

And also touched upon on page 6 of the PHB:

I can imagine a situation where a person is riding a colossal mount. Something the size of a three-story building. The rule for the Mounted Combatant feat allows the rider to redirect an attack targeted at her mount to the rider instead. How could a rider three stories up possibly interpose her body against an attack being made down at the ground level?

The letter of the rule departs from reasonable imagination completely in this situation.

So the answer is best summed up as: the rider can redirect an attack to herself even if doing so would cause that attack to extend beyond its normal reach/range unless the DM decides that this is not feasible. In this case, what the DM says happens is what happens.

I have googled everything, I am desperate. I have installed Catalina yesterday and tried all the steps here (and more) that were logical to me. The thing is I have the feeling the current version has changed again. I have a parallel MacOS / Windows System with a third exFat partition and in Mojave and Lower I always create links for /Applications and /Users to put all non systemrelevant data into the exFat, it always worked fine (thought you have to make some adjustments in order to work with iCloud apps etc). I wanted to do the same, so I followed all the normal steps to create links for /Applications (also tried with /System/Volume/Data/Applications. But it does not work at all. Usually for example I ditto the /Application to the exFat partition and mv the old one into /Application.old (just to be safe), then I create the link. But I cannot rename or delete /Applications! Is it because they created Hard/systemlinks in Catalina?? I don’t get it. Will I be able to link out the folders to my exFat partition? Any suggestions?

I’m currently setting up a GCP storage bucket on my instance which will be used for backups. I have currently configured fstab to mount the bucket on startup using the following config.

The problem is that GCSFuse keeps generating random files which it can’t delete due to the retention policy on the bucket so I end up with hundreds of files with randomly generated filenames in my bucket.

Any recommendations to resolving this?

In short – After resetting Windows 10, BOOTCAMP disappeared on the OS X side, and after disabling Hibernate on the Windows side, I was finally able to reassemble BOOTCAMP. The problem being, now it shows up as a local volume instead of a boot volume. I can reboot, hold down the option and access Windows – it works. I can see the files in read / write when I go to / Volumes, I can change in the system preferences the boot disk to be Windows BOOTCAMP, but I cannot get the actual volume to be displayed in the devices or on the desktop like that once. Anyone else encountered this problem and a way to fix it besides running the Bootcamp utility and trying again? P.S .: We run El Capitan here.

Sharing via Google Drive has so far been an ugly experience. It's good for sharing a file, but over time, everything becomes a mess.

I could create a LINUX cloud box and get everyone (on the mac) to use https://osxfuse.github.io/ who can mount a remote file system. But I don't really want the responsibility of maintaining an external server hosting critical files. I guess I could try to mount it in a sub-folder of my personal synchronization google-drive folder, in which case I would always have a backup. But it sounds like excessive engineering.

This is a tricky question to ask, as I know the answer could be an existing product, and product requests are generally frowned upon on SE. So please say that if your answer is a product suggestion, please comment on it.