Hello I am fairly new to photography in general and my current set up for taking pictures of my watches is a light box I bought off amazon. I crank the wattage all the way and after I take my photos the watch doesn’t look natural as the professionals. I know the issue is with the lighting as I just use the light box light but not sure how to go about this. My goal is to give my watches a more natural look throughout the entire watch to show all the scratches. I also have an issue with the reflectiveness of the crystal. I can literally see myself in the crystal of the watch trying to take the photo when I shoot straight on. So I tried taping a white sheet a paper around the lense which helps with diffusing the light onto the subject but creates a black dot as shown below. Any help would be great appreciated.
I tried using photoshop but it takes too long to edit and post the watch since I have dozens of watches to get through and post on ebay. THE BLUE PHOTOS IS MORE OF THE GOAL AND NOT MY PHOTOS, THE OTHER TWO PHOTOS ARE MINE.
Here is my camera settings: 1/50, F10, iso 100 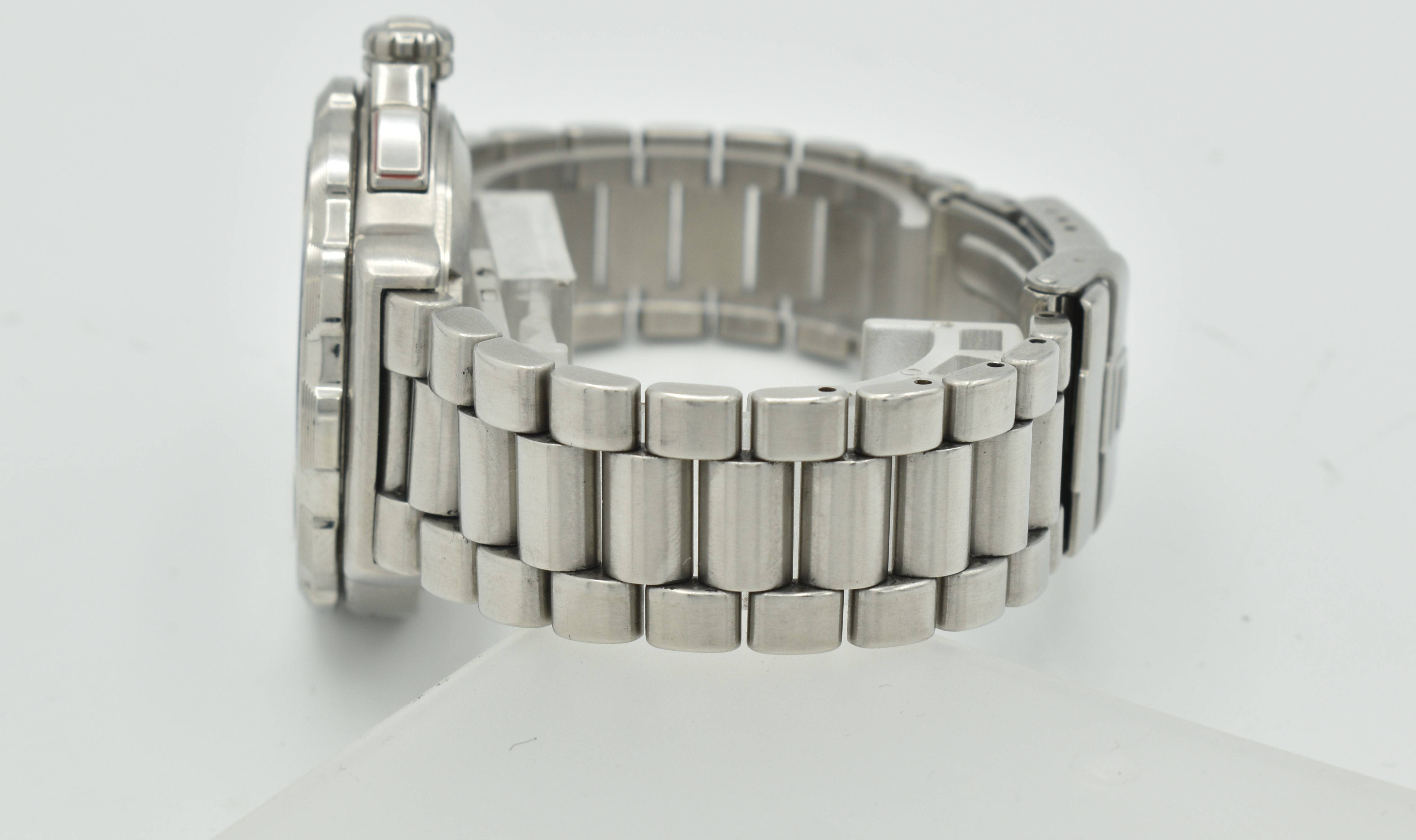 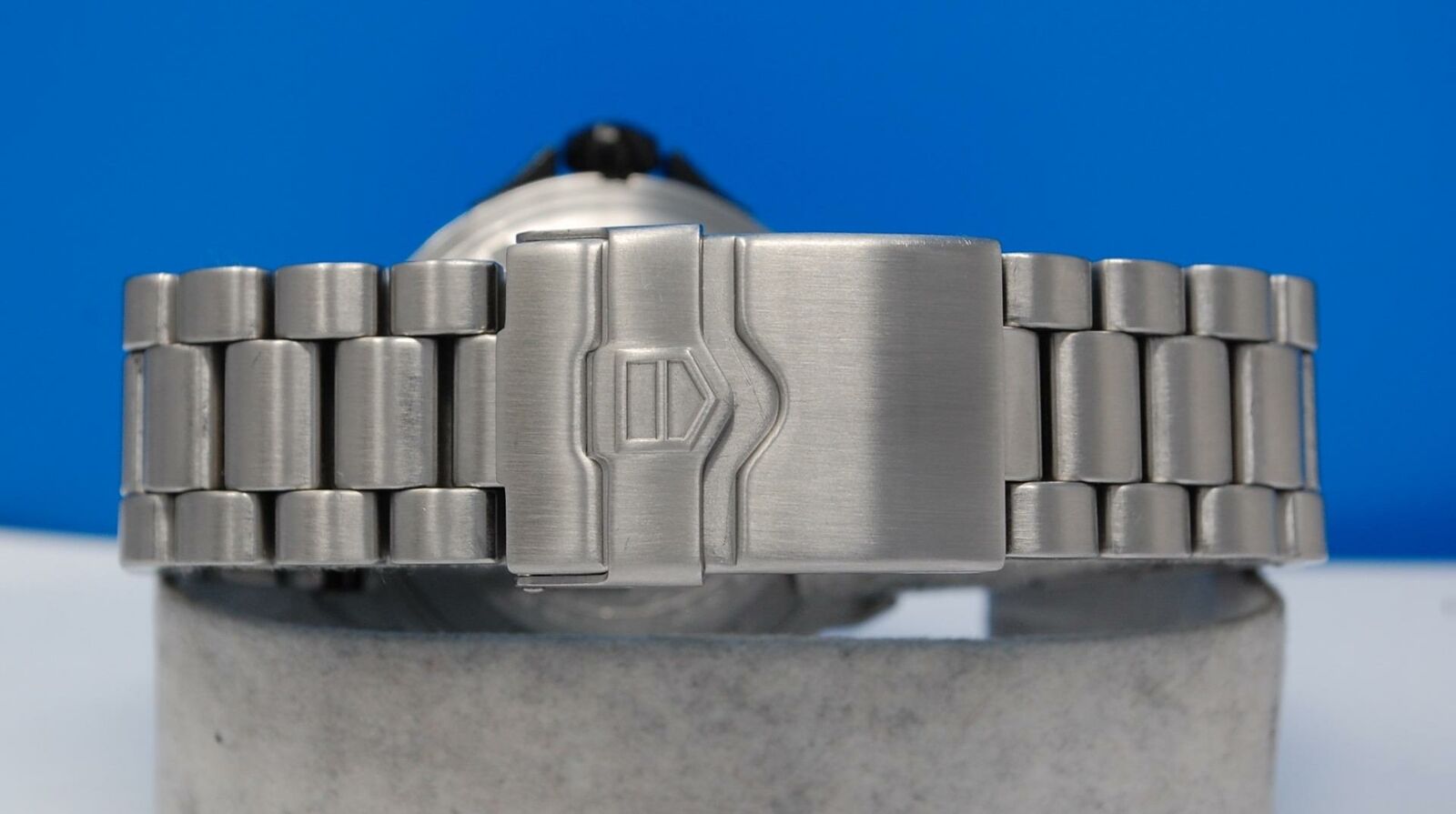 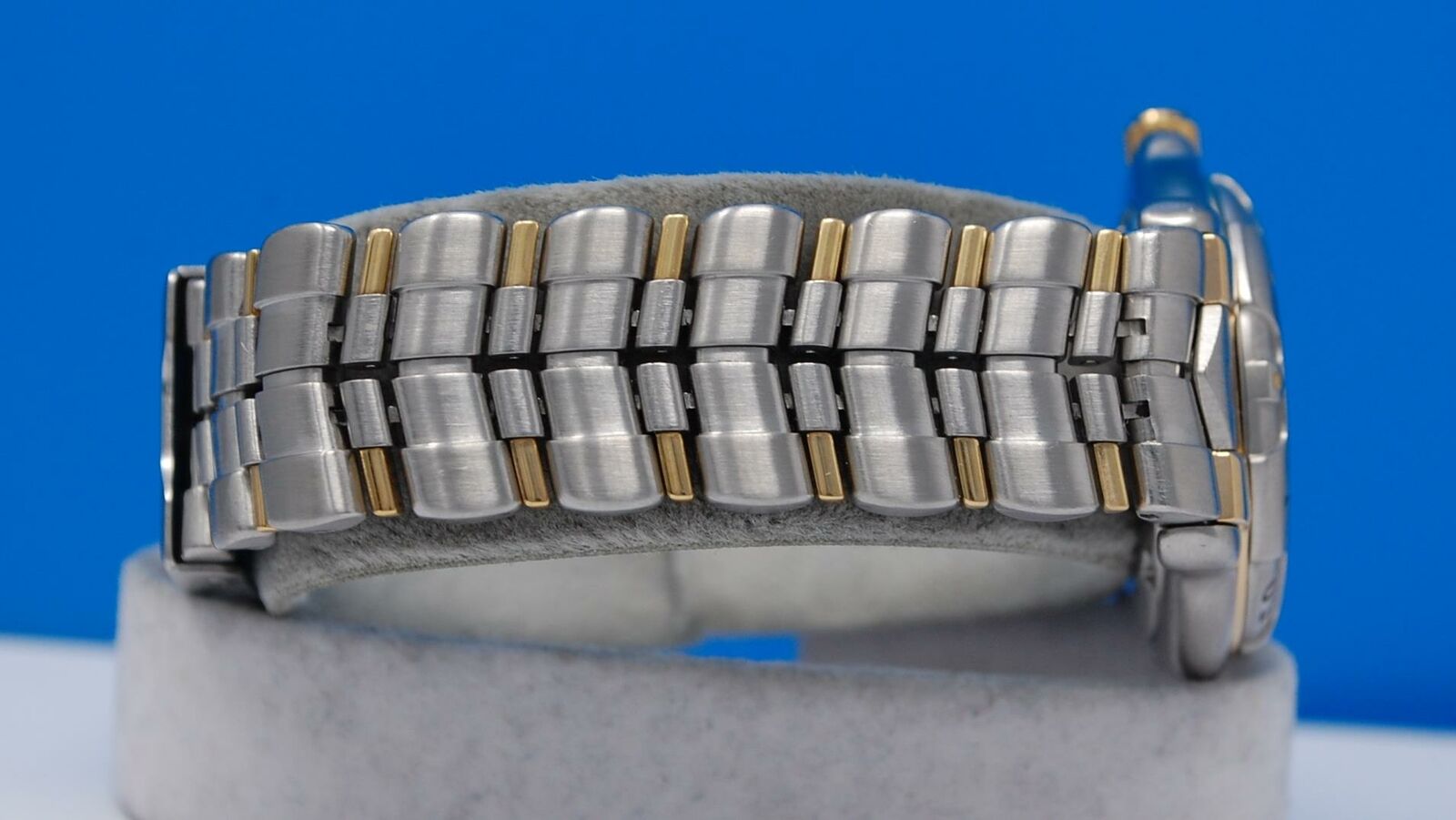 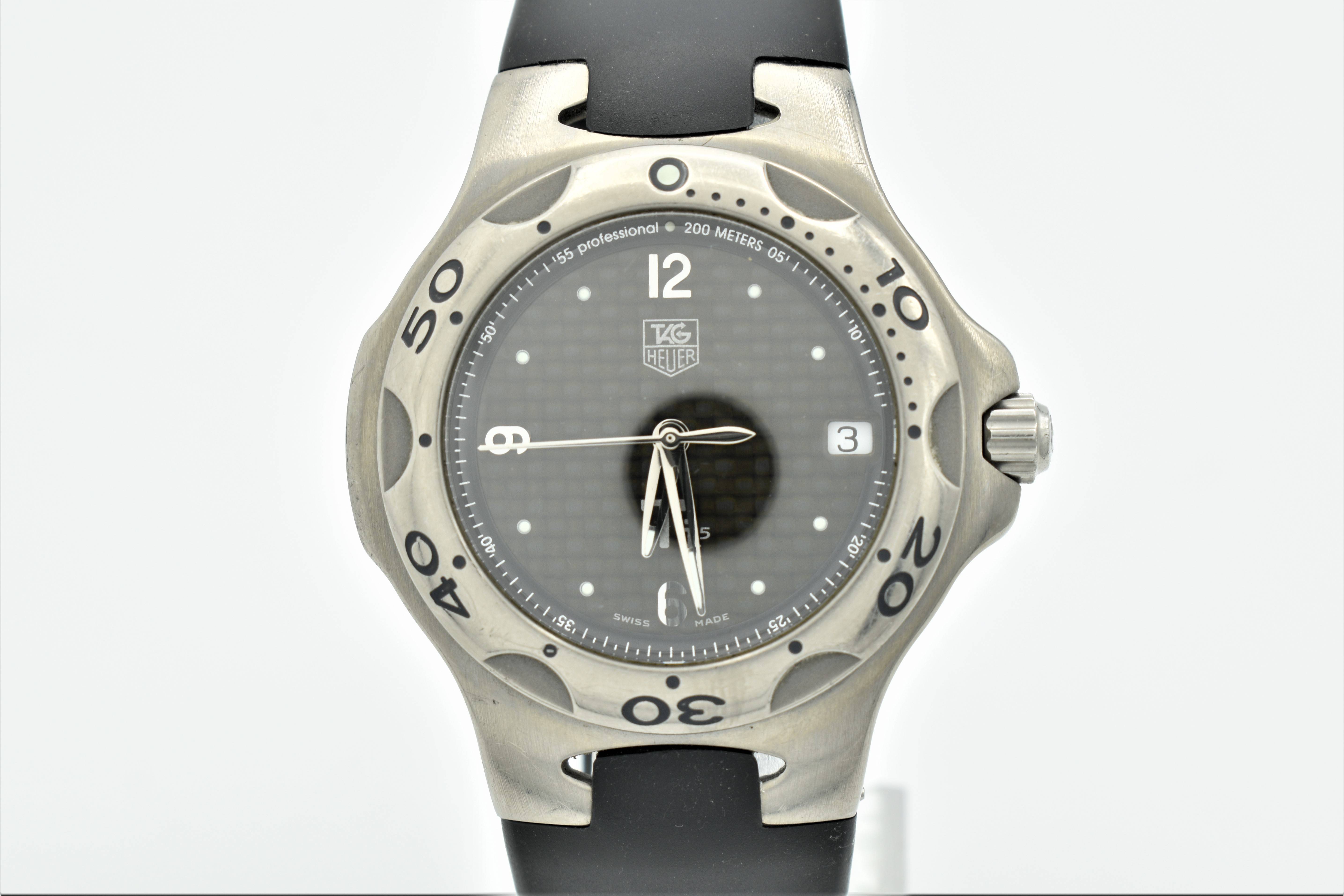 I think it is possible to have a set of all-natural numbers, however I’m not sure why.

I’m trying to figure out what a good natural key for a Physical Mailing (PO Box) address would be. I haven’t designed the fields for the table yet, and initially I was going to go with a surrogate key and a text field for the address, allowing free input. But the senior dev is interested in having a natural key (just for this one table).

However, it’s not quite making sense to me, because I’m not sure how to ensure, with an address, properly input data (when keyed in either on create or to do some kind of manual lookup). I know that you can often format the same address in more than one way.

All valid, but all different.

Any thoughts on the matter would be greatly appreciated!

But you can also spend hit dice in short rests, even with this variant, and that puts the lie to the claim of “no difference.”

Also, even if you played with a variant of Slow Natural Healing that blocks using hit dice in short rests (!), some homebrew rules are affected by the fact that in 4E, there was a similar notion to hit dice called a healing surge, but those could be spent both inside of combat via your second wind and in/out of combat via healing magic. So you would have to also make sure that you are not using any of those rules, and that the only way to spend hit dice is long rests, to make it truly irrelevant. In every other case, there potentially is a real difference here.

The key is that those extra 2 hit dice could make a life-or-death difference in facing the Big Bad, even if it’s all the same when they get around to the Minor Goons. There are real circumstances in which those two hit dice can mean the difference between life and death for your character, because you might not get a long rest right before a boss fight.

So there are three tiers of how nice you can be to your players. Here they are, in order from nicer-to-them to meaner-to-them:

I will say that for story reasons I prefer (1) and (3) over (2), because HP-then-HD has this really weird pathology where, in all of the cases where this matters, you can end up taking a long rest that is much less healing than a short rest which happened prior.

In fact if you think about what smart players would do in the case of (2) above, they should really just take a short rest immediately after their long rest to recover a few more HP before they head home. Strange, right?

I have to mention that this is a special case of what in accounting is called a “cash flow” problem. The idea is that even if long-term your financial status is solid (i.e. you don’t have a revenue problem), you could still run into short-term problems if you overextend yourself. So if we stipulate that on average you as a person will make a fixed amount of $1k/week, you still have a strong reason to prefer “I get paid for the next four weeks up-front” to “I get paid each week at the start of the week” to “I get paid each week at the end of the week” to “I get paid for all of it at the end of 4 weeks.” Yes, after 4 weeks the amount made in each of these 4 cases is exactly the same—but in each pair, there are some situations where your accounts run dry in the latter where you would not have gone broke in the former. It’s the same thing if you’re planning a big party (say, a wedding) that comes near what you can financially bear: you want to pay your vendors as late as they will let you, and you want to dig into emergency funds etc. as early as you can, so that you do not ever have trouble putting food on the table in your day-to-day life.

And managing a company’s financials is the same thing; you might have a bunch of invoices out that on paper mean that you have an extra million dollars in the bank and are very successful revenue-wise and profit-wise… but if your actual bank balance is hovering near zero because your clients are taking a while to pay those invoices to you, you nevertheless have a cash-flow problem on your hands. Because your employees do not want to hear “hey, uh, I can’t actually pay you the full amount this pay period, but we’re gonna work real hard to make sure that we can make it up to you by the next one”—like, that can be a fatal mistake to your company.

AFAIK Paizo hasn’t made errata for this. I believe the most common RAI is that even on a Natural 1, you can use abilities such as Fallback Strategy (there are a number of them now) unless you tell the GM, essentially. Not as in “oh don’t look that didn’t happen” but more of a “I’m not using that roll, I’m rerolling with x-ability”.

Essentially, you knowing that your roll will have a bad result and knowing the result are two different things.

Results being revealed is a mechanic of the GM, not the player, therefore if you do not provide your natural one as your roll, you do not ‘know the result’, only what you expect the result to be.

This also fits with the intent of the abilities- getting a 2 is nearly as likely to fail almost any check just as assuredly as a 1, but you could use it on that.

This Forum has a lot of speculation about the matter if you’re interested.
This reddit is about Misfortune but has a similar perspective about that reroll mechanic.

I’m stuck on how to progress with this proof, despite I have tried, I cannot see the next move.

Given this proof without predicate:

So far what I’ve accomplished: 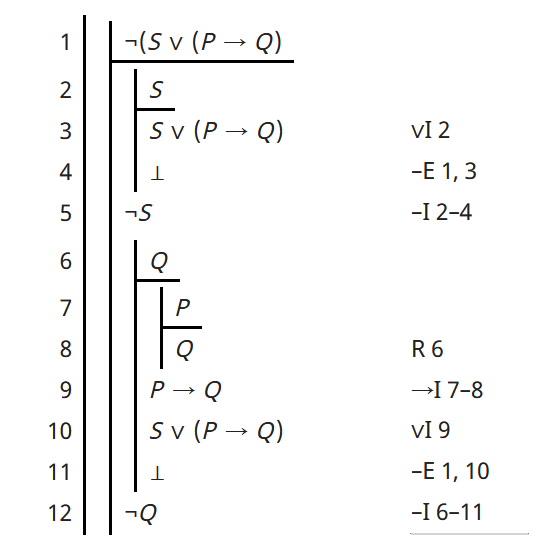 My idea is, as I can’t see any other option using (-(Sv(P->Q)) as the first assumption in order to introduce a conditional, so the assumption must end in P ^ -Q ^ -S. As you can see I have obatined -Q and -S but, how do I proof P?

The sixth level Circle of the Stars feature, Cosmic Omen, allows the druid to, for the remainder of a day, use their reaction to either help their allies or hinder their foes:

Whenever you finish a long rest, you can consult your Star Map for omens. When you do so, roll a die. Until you finish your next long rest, you gain access to a special reaction based on whether you rolled an even or an odd number on the die:

Weal (even). Whenever a creature you can see within 30 feet of you is about to make an attack roll, a saving throw, or an ability check, you can use your reaction to roll a d6 and add the number rolled to the total.

Woe (odd). Whenever a creature you can see within 30 feet of you is about to make an attack roll, a saving throw, or an ability check, you can use your reaction to roll a d6 and subtract the number rolled from the total.

Note, however, that in the description of this feature, the player is simply instructed to roll “a die”, without qualifying what kind of die it has to be. This poses no issue for the “standard issue” dice used in 5e D&D, since the d4, d6, d8, d10, d12, and d20 all have an even number of sides, and therefore an (assumed, with fair dice) equal probability of rolling an even or odd number.

However, there are dice that have odd numbers of sides. In this situation, a player could pick up a three-sided die, for example, and they’d have a 2/3rds chance of rolling an odd number, biasing their feature towards hindering enemies.

Is there any rule in 5th Edition D&D that forbids a player from choosing to do this?

No, a natural 20 is not always a critical hit.

The key phrase is in the second passage you’ve quoted.

If you rolled a 20 on the die (a “natural 20”), your result is one degree of success better than it would be by numbers alone.

The first passage says “when you succeed on a natural 20,” which is to say, when you roll a natural 20 and the result would be a normal success before factoring in the increase in degree of success.

So, a natural 20 can even be a failure if it would usually be a critical failure, it’s just that this is very uncommon in the game due to the expected level of enemies you’ll be facing.

So if I roll a 20 on my third attack, but it is still lower than the enemy AC (because of MAP for example), is it a critical hit, or a normal hit?

It would be a normal hit, unless your roll total would otherwise be a critical failure, in which case, it is a normal failure.

Hello all, I have rent a local store and I want some advice on how to get the clients to buy from my local store. any ideas, recommendations!

How would you construct a Turing Machine that calculates log2(n)?

In the final output tape, the tape should only contain blank symbols followed by a consecutive number of 1’s from the final head position.