When I run D&D online, I want to delegate players to have control of their tokens.

If one of my players tells me they cast flaming sphere, I want to be able to tell them to go find an image of a flaming sphere and put it on the map as a token.

If one of my players turns into a dire wolf, I want to be able to tell them to replace their token with a dire wolf token with the of their choice.

If one of my players uses summon nature’s ally and summons a bunch of critters, I want to be able to tell them to put the critters on the map.

I believe that using the roll20 console I could do this work for the players, but I want to spend my time doing other things, for example running the next player’s turn while this player generates a moonbeam token.

When I’ve tried to use roll20, I always had to create tokens for my players and then delegate them permission to use the tokens, and I frequently got it wrong and had to redo it.

Is there a way to configure roll20 to let my players create and manipulate tokens of their own?

When i try to roll the dice from D&D beyond i can only roll it if i (as an example) click on my longsword and then go to the top right and click ”beyond20”, at first before i changed the settings if i hovered over ”longsword” it would popup an icon in red, but now its grey and i cant click it. Which setting do i have to enable/disable to fix this. I have tried looking over through the settings somewhere around five times

I created a set of macros using the API to generate attributes for characters on Roll20 to refer to their pronouns for use in macros. I currently have it set up with 3 macros, each with 4 lines because I can’t add multiple attributes with a single command.

How can I use a macro to query which set (male, female, or neutral) of pronouns I want to use? I know I should be able to do something like

And that should work, but I’d rather have it where the contents of those sub-macros are in the main one and delete the sub-macros. Problem is, each of the sub macros is 4 lines such as #Pronouns_F

Is this a thing I can do or do I have to settle for the sub macros?

Sorry if the question has been asked before, but I haven't found the right answers for me.

I am a new DM playing on Roll20 and I am creating a new class that fights with magic cards, dice and coins.

I need a deck of cards from which you can draw, where all the cards have different effects. But I don't know how to make it very effective, because some cards in the game are duplicates.

In addition, if you draw a card, it disappears from the deck. But you should also be able to "shuffle" the deck to put all the cards back into the deck. I thought about making a drop-down table on roller 20, but from what I know, you can't set a parameter to get an event once before "resetting" the table.

Is there a better method than writing all the cards already drawn somewhere and letting the player roll the table until he gets a new card?

I have two ideas that Roll20 can handle:

If the grid is labeled in a similar way to a chessboard, you can easily indicate areas, squared, where players observe something different from what the map itself shows.

If there is an illusory swamp, you can put it on the map layer so that everyone can see it. Then if a player with True moves in a range that allows them to perceive the illusion, you can directly whisper this information to them

/ w TrudyTheTrueSeer Moving forward, your Truesight reveals that the swampy terrain in squares (36, 47) to (38, 49) is an illusion.

The labeled rows and columns correspond well to the design of the square mosaic map, and it is very quick and easy for you and your players to refer to the same specific areas as needed. It also allows players to easily draw their own card or take notes to keep track of information, as it is difficult to show different cards to multiple players when they are in the same place.

A community map with individual legends

It is essentially a battlemat approach directly carried in Roll20.

The basic idea is that you distinguish the elements of the map in a way that can only be decoded using a legend, and then give each player a legend that reflects their perception. This will work better with less detailed map elements (like colored boxes, lines, or simple drawings) than with tokens, but could also be applied to some tokens.

If we have an area that is normal terrain but has been subject to Arcane Mirage to look like dense and thorny vines, the area can be represented simply by a green rectangle indicating the dimensions of the area, or a copy-paste mass of a simple drawing of a thorny vine (or something else , as long as it is separate from other elements on the map). This is the common card that all players see.

But the map legends that explain the map are distributed to each player individually. Players with True Seeing will find the entry for the green lines (or this drawing in this color) as illusory terrain, while the rest will find the entry describes the dense and thorny vines ostensible as they appear to the vision mundane.

This approach requires a lot of planning as you need to make sure that the symbols and colors are distinctive enough to stand out from the crowd at a glance without being obviously noticeable. For example, if there are real vines as well as illusory vines on the map, it transmits metadata to players if the real ones are green and the illusory purple ones – it is clear that they are different in some way, unless each color is just as plausible.

This approach can also give information on the whole map at once. If a player identifies purple vines as illusions, then all the purple vines on the map will likely be illusions. You can tone this down with more randomly assigned colors (green, red and blue vines are real, but purple, black and yellow vines are illusions), but it will likely warn players that there are varieties of terrain feature that matters.

In any case, this approach slightly eases the burden of storytelling for you. You can always describe things as what they look like, and players can refer to their own private knowledge to interpret them correctly.

I recently moved my Pathfinder 1e campaign online. After a few tries, I decided that the Roll20 dynamic lighting system was worth the investment. However, during our first session using the system, they found it cool but frustrating.

Most of the players' frustration came from a problem of not being able to see what was next to them. The situation was as follows.

This is where they encountered a problem and some frustration. Due to the way darkness is handled with the dynamic lighting tool, players had no way of following the character's movements with darkvision.

As soon as the players entered the dark, they could no longer see the characters right next to them and therefore could not follow their movements in a line style. This led to frustration, and players without dark vision commented "I can't do anything because I can't see".

While being unable to see their opponents and having to carefully manage their light was the goal of this system. To frustrate my players and make them not appreciate the game is an unacceptable consequence.

How can I configure the dynamic lighting system and the player tokens to allow them to work cooperatively in the dark?

I want to run Lost Mine of Phandelver online. I watched Roll20.net and D&D Beyond. Both sites sell the module at the same price.

My understanding is that Roll20 is a "table top", while D&D Beyond is more a digital "compendium".

So, I don't really like the Roll20 audio system and it doesn't really match the way I DM. I'm looking for a third party app that my group can download during the Discord call where I can browse music / audio without using Roll20. Some sort of app where I, the DM, control what they hear and can play tracks that I upload (or similar) to the app so they can hear. I have tried the robots of contention (they are bad), so I really wonder if anyone has miracle work software that would meet the needs of my party ..

I have organized several games for friends who live in other cities on Roll20 and the current campaign I am launching is there. There are more pros and cons than that, but as you only asked for two, here they are:

Benefits:
1) all the important features you need to play are free and if your DM decides to pay, everyone in the game can see the paid features like tokens and modules.
2) It is relatively easy for everyone to get on board and play, and with a little preparation, this can speed up things like documents and player turnover, as there are mechanisms in the application rolling dice (if you are not superstitious like my players about them)

The inconvenients:
1) In my experience, there is no method to show verticality. That is to say, you are going to have to remember the height of flying enemies like dragons.
2) Getting the game grid to line up with the maps you download can be a bit difficult at times. There is a tool that is supposed to help define the roll20 grid, but I tend to find that it always drifts slowly due to the difficulty of getting the grid size exactly right.

My best advice is that the DM gets used to the system and tries to configure as many features as possible beforehand. Spells can be defined from the collection, which makes it easier to roll, and you can predefine tokens on character sheets and define them with things like HP bars. I find that running games work just as well as my in-person games, although sometimes things can be slowed down by technical difficulties.

By accessing the options on each page, you can set the size and scale of the grid: 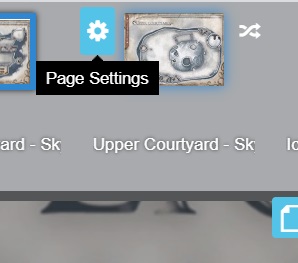 Then change the size of the grid: 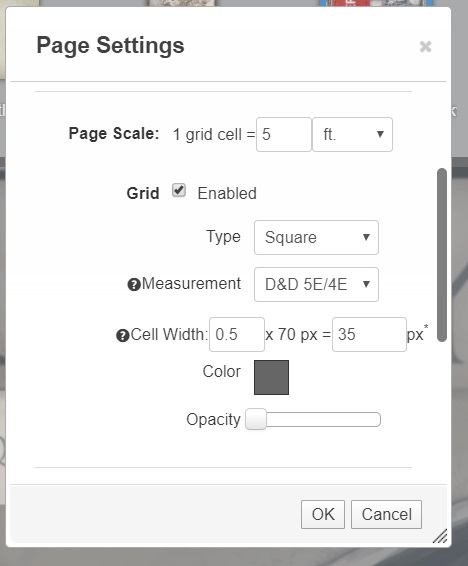 If you have a map where roll20 interprets the 10-foot squares of the map as 5 feet, you can either increase the "1 grid cell" setting to 10 feet, so all the squares are measured at 10 feet or if you prefer, you can halve the "cell width" which will make the grid of roll20 smaller, each square being 5 feet in your map.