When inserting an item I first hash its key and insert in the tree at the hashed position. That insertion should probably take O(log(k)) complexity where k <= n, because k is the number of values inside that bucket, but that makes that O(logn). Now my problem is with the rehash. I set the max load factor for the hash map to 0.9, which is the optimal for the separate chaining approach.

First I allocate a new hash map with double capacity, I then create the trees for each position of that new capacity hash map, so I make one iteration for the hashmap capacity. I then traverse the old hashmap, I visit every tree and every node inside it and I re-add it into the hashmap using insertion ( so I call hashmap_insert again) , so it hashes to the correct position. However, when traversing the trees, I first get the first node of that tree, and for every node in that tree I call a function called tree_next, which given a node returns the next node in that tree, taking O(logn) time, where n is the number of elements in that tree. However, because we keep the trees relatively “short”, then we can suppose that it’s O(1). When is that though ? When we study the amortized time, or the average ? Or when studying their combination (average time-amortized)?

I would love some help! Thanks!

I am working on a project for a customer which have 12 offices, and they need to have separate discussion for each office, where users inside other offices should not view the office conversation. so i am planning to create 12 Yammer communities for the 12 offices, and define each community to be private, so is my approach valid?

I am trying to insert rfid tag reads from a socket using python into a sqlserver database. since im using a tcp socket, the data will sometimes combine and put multiple entries into a single row and i need each read to be a different row. i have combed through multiple sites and the closest thing that i could find was this Python Socket is receiving inconsistent messages from Server but i wasnt able to make it work. i am able to use len to separate them, but i have no way of possibly knowing how many reads will be combined together. here is my current code (section that is commented out is using len)

I have seen several instances of people using executemany but it was always manually entering a tuple or list. I also tried turning it into a tuple. here is the output that i get.

The Dungeon Master’s Guide lists the Nine Hells as a single plane in Chapter 2: Creating a Multiverse. It also often mentions the home plane of devils, without ever specifying a level for any of the devils.

Mordenkainen’s Tome of Foes counts the Nine Hells as a single plane. In Chapter 1 The Blood War:

To the good fortune of the rest of the multiverse, almost all the
battles in the Blood War take place in the Abyss and the Nine
Hells. Whether by cosmic chance or the design of some unknown power,
the dark waters of the Styx provide passage between the two
planes, but pathways to other realms are at best fleeting and
unreliable.

Descent into Avernus also refers to the Nine Hells as a single plane. In Chapter 3 Pervasive Evil:

Evil pervades the Nine Hells, and visitors to this plane feel its
influence.

…the creature’s alignment reverts to normal after one day spent on a plane other than the Nine Hells.

This question concerns a new cardinal characteristic of the
continuum that arose out of issues in my answer to the question,
Sunflowers in maximal almost disjoint
families.

A $Delta$-system, also known as a sunflower, is a family of
sets with all pairs having the same pairwise intersection.

In his earlier question, Dominic had asked whether every maximal
almost disjoint family must contain an infinite sunflower. In the
general case, this seems still to be open, but my answer there
shows that under the
continuum hypothesis, there is a maximal almost disjoint family
containing no sunflowers even of size $3$. Indeed, the construction
there shows that there is a maximal almost disjoint family $langle
A_alphamidalpha<omega_1rangle$ such that every $A_alpha$ has
different intersections with every earlier $A_beta$, for
$beta<alpha$. This property implies that there can be no
sunflower of size $3$ in this family. (But notice by a simple
pigeon-hole argument that it will be impossible to extend this
stronger property to enumerations beyond $omega_1$.)

And more generally, I ask the same for sunflowers of any particular size.

The question leads naturally to new cardinal characteristics of the
continuum. Namely, let us define almost-disjointness sunflower
number, officially denoted $frak{a}_{kappa}^Delta$, but let me immediately drop the superscript and write just $frak{a}_kappa$, to be the size of the smallest
almost-disjoint family that is maximal among almost-disjoint
families with respect to the property of not containing a sunflower
of size $kappa$. (We consider only $kappageq 3$.)

The construction on my
other answer shows that $omega_1leqfrak{a}_{kappa}$.

Question 2. Can we separate these various cardinal characteristics $frak{a}_kappa$ from each other, and from the almost-disjointness number $frak{a}$?


Software Engineering Stack Exchange is a question and answer site for professionals, academics, and students working within the systems development life cycle. It only takes a minute to sign up.

Assuming that software engineering jobs can be divided and separated into several domains, what are the prevalent career paths that are distinguished from each other based on skillset and required knowledge? I’m making a list. Which I add to as long as there’s a new skillset.

kanayt is a new contributor to this site. Take care in asking for clarification, commenting, and answering.
Check out our Code of Conduct.


One question to consider with this, is are the majority of visitors to your homepage returning users (and therefore looking to log in) or are they new visitors that you want to sign up?

If you’re skewed heavily in one direction, go for that (e.g. if 90% of visitors don’t already have an account, you probably dont’ need to login form on the homepage, because focus should be on signing up). If it’s 50-50 or more for returning visitors, the log in on the homepage would certainly save hassle for a significant number of users, so as long as it’s done unobtrusively to those who don’t need the login form, it seems like a good idea to have it on the homepage.

If you’re a new app looking to build up user numbers, the focus should be on one main sign up button, and an additional form or button that could pull focus from that is best to avoid.

I can split the animations of an FBX file into individual takes by script.

However, I have not found a way to do that with .anim files.

Is it not possible to split .anim files into individual takes?

ps:
This is the script that I use to split an FBX files into individual takes.
However, I can’t use the same script for anim files because there is no model importer for an anim file:

I’ve looked at all the items listed at the end, and still can not find any instructions that match what I see on my laptop in terms of exporting to files on my hard drive.

Question: I have a burst with 18 photos that were transferred to the Photos.app on my MacBook with macOS 10.15.7 from my iPhone 6. I want to export all of them to 18 separate images on my hard drive. Is this possible without going to “the cloud” first or installing more software? 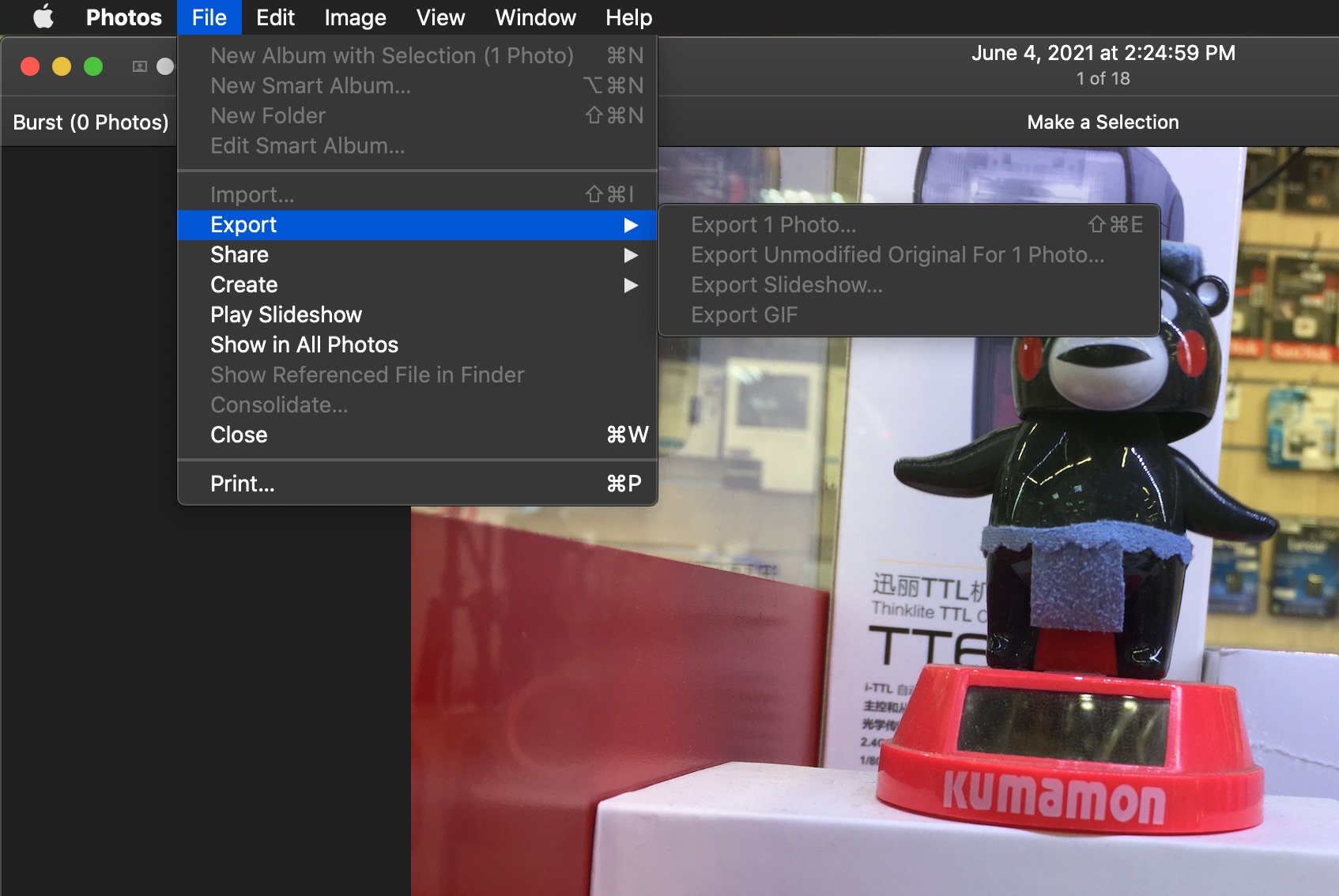 above: I’ve selected all 18 images by going through them using the right-left arrows to scroll through the row at the bottom and clicking each image so that a check mark appeared in the bottom right of every image. Then I clicked the blue Done at the top right of the display. I never saw a “keep all” button mentioned in some Apple tutorials but perhaps those were for previous versions.

below:: The appearance is unchanged in the main photos window, and I only have options to export 1 photo. If I go back to the burst selector feature (in the first screen shot) and select a few items, click done, then come back here, I still don’t have the option to export anything other than one photo.

No matter what I do I can’t get (for example) the “export GIF” feature to work either. (note: I want the individual photos, the GIF feature being blank indicates that I’m still missing some step). 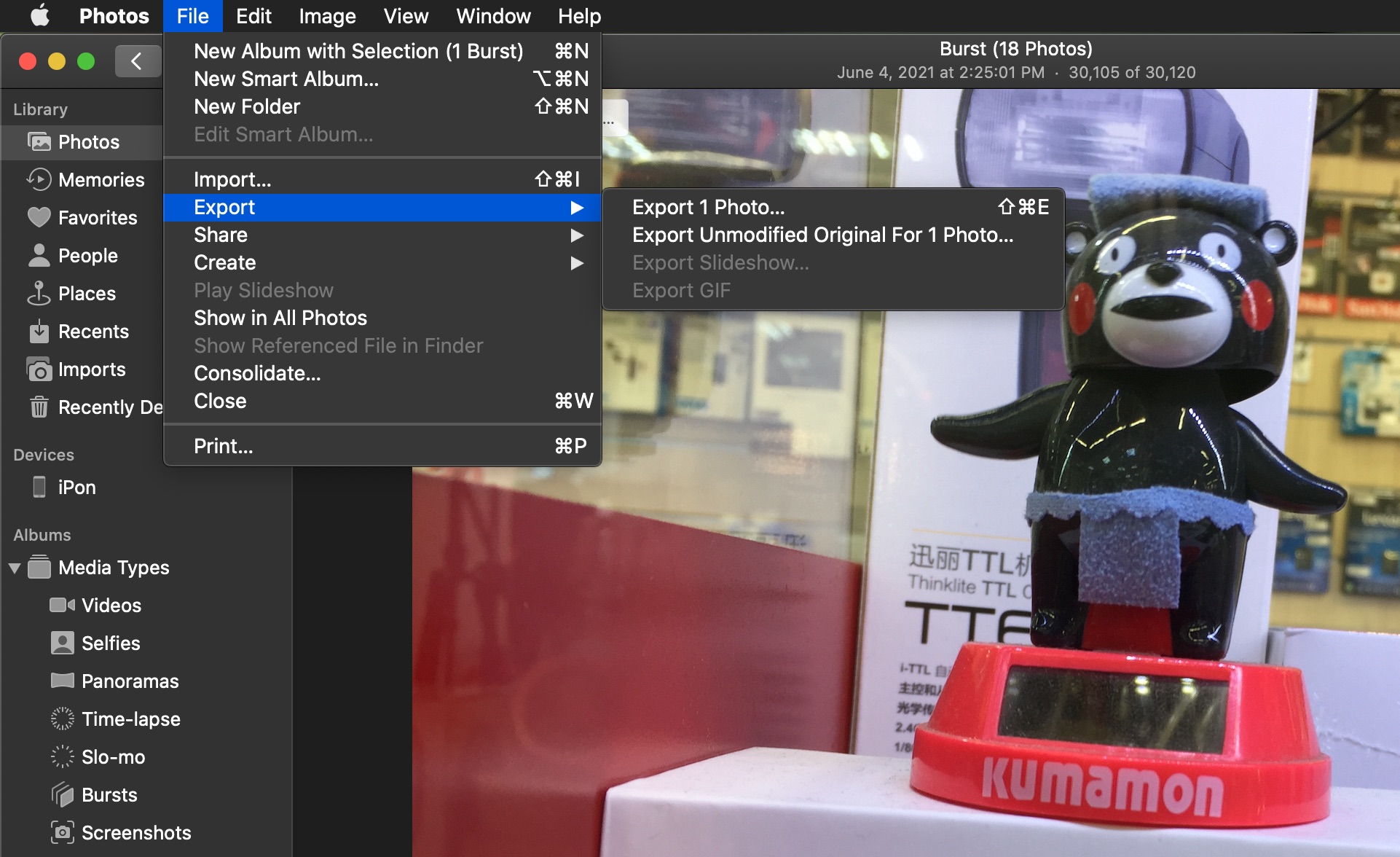