My plan is to hide an entire row if a specific cell in the row showed specific value. I already found the script and the script work amazing. But the problem now, since the script use onEdit function, it only worked when I input the cell manually. Since we handle a large amount of data, this manual input is not reliable and impossible to manage.

So, do google script have a function where a script can be triggered by formula based value? I already try onOpen, onChange, myFunction but all failed. Can anyone please help me?

Here is the script that I used for my sheet.

As for now, we are using the filter function. It works just fine, but its good to have this script to work.

I am trying to query several different colors from one column. This is what I have so far:

For example I want to query all the items that are Green, Red, and Blue in the F column. Is there a way to query for multiple selection in 1 column?

You can try the following 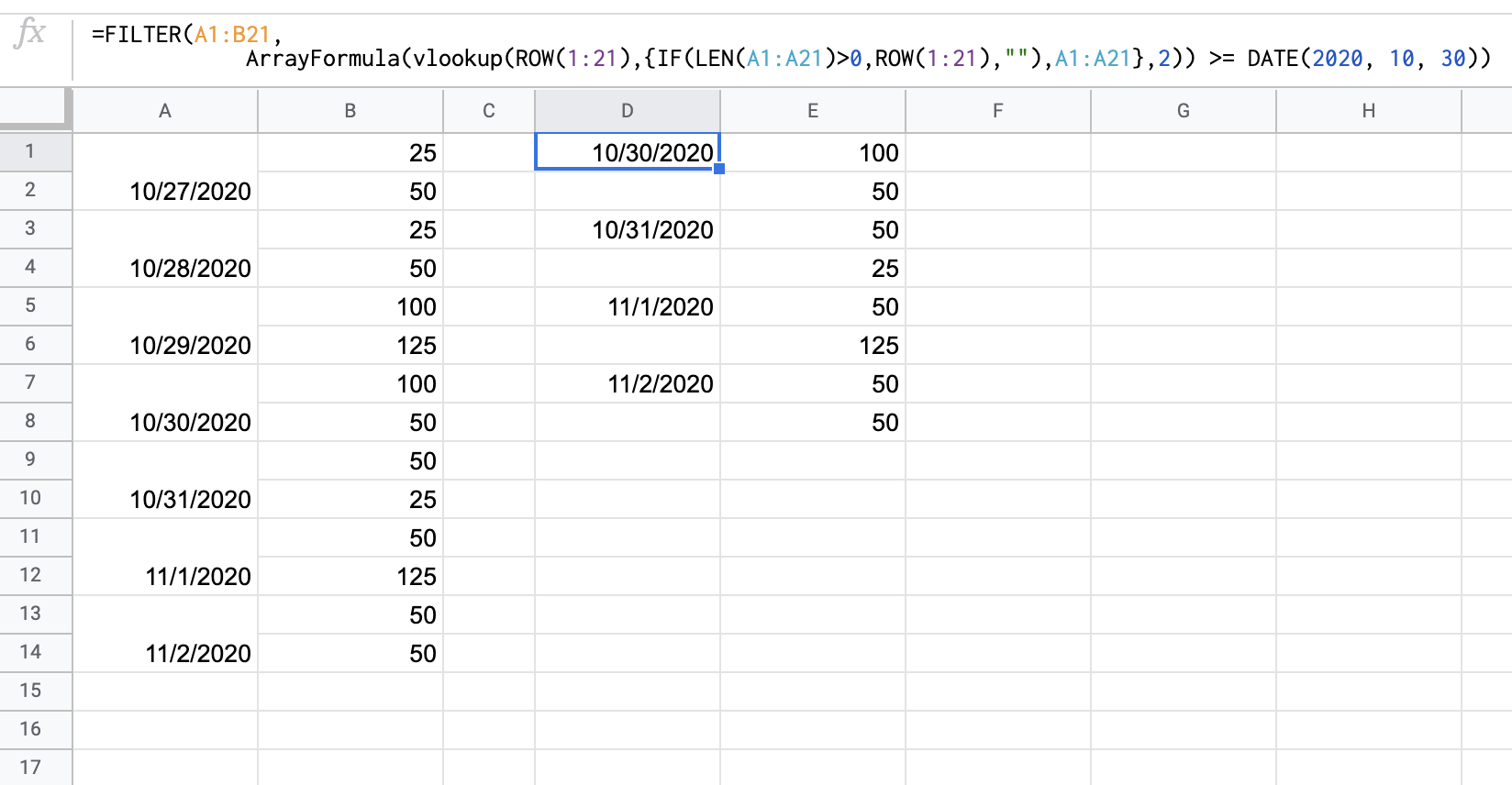 What we do is create a virtual column for column A.

(Try the partial formula by itself and see how it behaves.)

I’m trying to write an Apps Script that change the font color of a cell when it value changes.

I found a way to to change de fontColor of a range, and add to trigger ‘onEdit’, but the all range is changing and not the single cells that I’ve been modify.

Here is my Script :

I have found the the regexmatch solution for substring: Google Sheets formula for “if contains”

However, why for “” is not working? I’m trying to make a condition if the name contains “” it will exclude the stamp duty cost.

This question was migrated from Super User because it can be answered on Web Applications Stack Exchange.
Migrated 36 mins ago.


I have this text:

And I want to grab the word “Account”, but when I use this regex

It returns “” because “settings”><div” is the first valid instance.

My tags and text will change every time I run this, but I want to select what’s between > and <, IF it is text, and I can’t figure it out.

I’m looking to match, with VLOOKUP, part of the words in a column in the main sheet to an index of keywords/categories where partial words are stored for ease in another sheet.

This means the VLOOKUP needs to match partials in the ‘Categories’ tab first column. How does adjust the VLOOKUP formula to achieve this?

PS. My question is quite similar to this one with the vital distinction of wanting to match substrings.
Categorize cells in Google Spreadsheets

I’m trying to figure out a way to bring the previous edit of a particular cell in another cell. I cannot use version history because every cell may e edited at a different time in different versions. I cannot take all version create subsheet and do a vlookup, So is there any way to run script or update a formula for the same?

I have generally bunch of pics/slides which I like to add into sheets using Insert > Drawing which allows me to annotate/edit freely.

The is that I need to do that 1 by 1 which is very annoying so I am looking for a way to automate this somehow.

As I said, I do this operation manually through sheets menu for each image I want to add:

I am looking for a way to bulk upload images as such. One drawing per image so I can annotate each separately later when needed.

I have close to 50 excel files – I cannot change the data source – and I steadily get more.
My task is to make sense of all that data and, lo an behold, save that as another excel file (I asked if I should put it in a local database, but no, I should not).

Asking on SO lead me here, as I thought it might be a better fit here, but my problem, if it even is one, is quite specific.

In my current code I used a couple of classes to model the data; I read somewhere that data should be data and not a class but are dictionaries helpful in this case?

As you can see my class has lots of fields; the two setter subs are private as any Subassembly automatically inherits the Topassembly’s ApprovedData and Eligibility as per requirement.

The CustomerCollection looks the same.

The HTSCode is currently part of the Customer as the file I found it in contains Customer and sales data and barely enough assembly data to identify an assembly – think “customer has a partnumber for an assembly and my files have a partnumber which don’t match” and you are just supposed to know which ones refer to the same assembly.

Instead of using these classes should I use dictionaries of dictionaries?
And for comparing data of different sheets should I store either these classes or dictionaries with the data in new dictionaries or arrays?
I’m not sure if there’s a maximum on how many custom objects I can create (other than memory limits), but I fear I’ll end up with a lot of Assembly instances in this case.

to collect all the data before parsing it to a sheet.