The information on ciphersuite.info is not presented in the clearest of ways. Let’s have a look at their FAQ:

What does insecure, weak, secure and recommended mean?

These ciphers are old and should be disabled if you are setting up a new server for example. Make sure to only enable them if you have a special use case where support for older operating systems, browsers or applications is required.

Secure ciphers are considered state-of-the-art and if you want to secure your web server you should certainly choose from this set. Only very old operating systems, browsers or applications are unable to handle them.

All ‘recommended’ ciphers are ‘secure’ ciphers by definition. Recommended means that these ciphers also support PFS (Perfect Forward Secrecy) and should be your first choice if you want the highest level of security. However, you might run into some compatibility issues with older clients that do not support PFS ciphers.

So to be frank: Weak means these have problems and should be avoided at all cost. Only enable these if you know you really really have to. Secure means they’re not technically broken, but they also don’t offer any desirable features. Recommended means these are the ones you should actually use.

I would disagree with their statement about incompatibility. The only clients that do not support modern ciphers are already outdated clients and no longer supported anyways. These clients should be dropped unless you have a very good reason to support them.

Why are these ciphers in particular considered weak?

As Soufiane Tahiri pointed out in his answer, CBC ciphers and RSA ciphers are not considered state-of-the-art anymore.

CBC ciphers have quite a lot of problems, such as the mentioned Lucky 13 attack, or other side-channel attacks. CBC also violates Moxie Malinspike’s Cryptographic Doom Principle:

If you have to perform any cryptographic operation before verifying the MAC on a message you’ve received, it will somehow inevitably lead to doom.

GCM, for instance, does not violate this principle, so it is vastly preferred.

RSA on the other hand does not support forward secrecy, which is a VERY useful feature when it comes to cryptography. Basically, with RSA, the server sends its public key, the client generates a random secret, encrypts it with the public key and sends it back to the server. The server then decrypts it with its private key. The following graphic from the Cloudflare Blog illustrates it well: 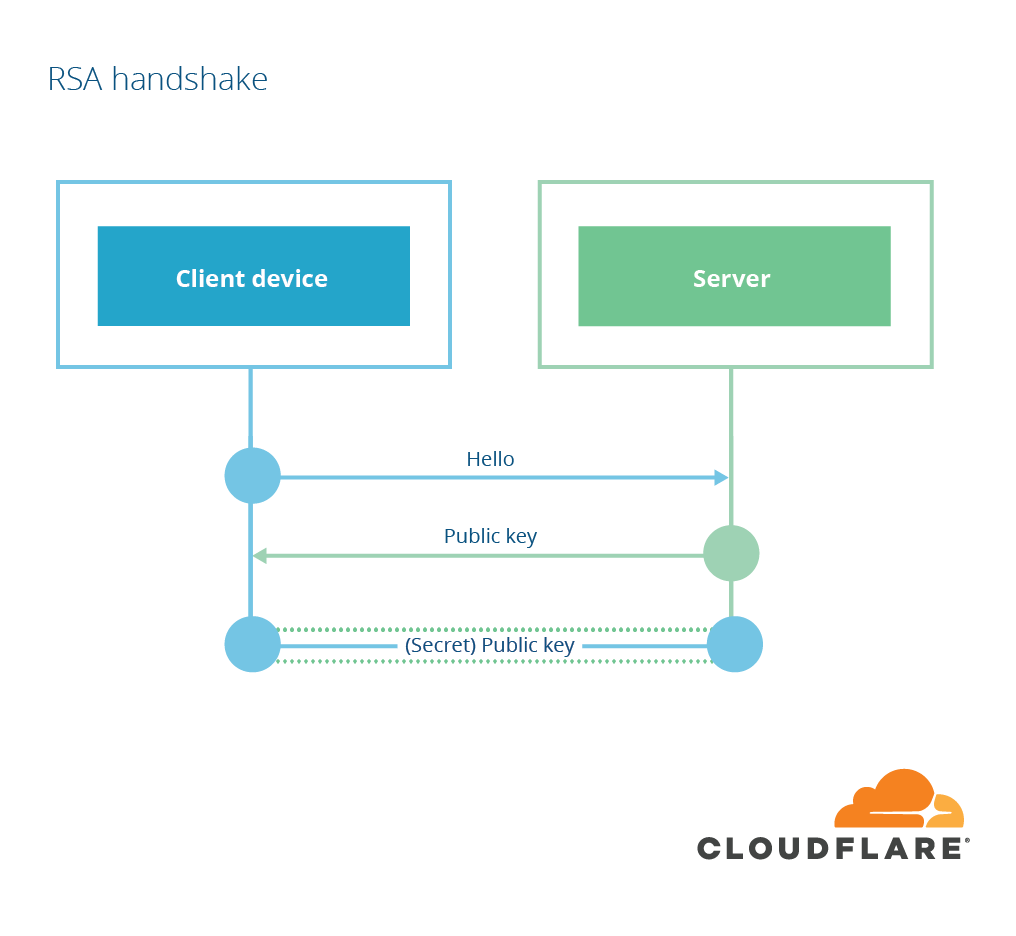 While this looks simple and secure, it does have one glaring weakness: If an attacker captures the initial key exchange and later gets the private key in some way, the can decrypt the previously captured traffic.

Cipher suites which support forward secrecy work in a different way. Instead of transmitting the secret over the wire, a key exchange protocol like Diffie-Hellman is used, in which the actual secret to be used is generated through mathematical means. I’ll leave it up to the reader to see how it works exactly. The advantage is that the secret is ephemeral, meaning that it exists only for one session and that’s it. Even with access to the private key and the entire communication, the secret cannot be determined. Furthermore, if the secret key used in one session is compromised, other sessions are still secure.

So what does this all mean?

In simple terms: Don’t use cipher suites that Qualis SSL scan claims to be weak. You have no advantages in doing so.

I use this server to host multiple domain (example.com, example.it)

I have created different SSL Keys for both domain and all their subdomain like xyz.example.com and xyz.example.it

If I add a dot after the domain (example.com.) in address bar I get this 421 Misdirect request error.

This is given because of this:

I don’t understand the motivation with this SSLCertificate mismatch.
How can this be solved?

I’ve an automatic renew for my SSL cert via CertBot.

I’m pretty new on this system and I probably miss something here.

Anyone can support me with this please ?

Thanks a lot in advance.

I am having some difficulties in understanding why is the finishedClient needed.

In case an attacker attempts an attack like a replay attack, it will show immediately that the attacker wasn’t able to derive the correct set of keys.

However, this would be evident even without this message as the attacker wouldn’t be able to encrypt and decrypt messages.

Is that the reason for this message, or is there another reason? What can we learn from this message that we wouldn’t have learned without it?

Powerful, high speed and budget web hosting for your websites. Now host your website with us on our high quality SSD servers. Find a fully inclusive, Unlimited Shared Hosting at a good price can feel impossible and time consuming. Also there are many cheap hosting providers and there are many people that claim to be able to offer you a Unlimited Shared Hosting but Raisinghost is best in among all.

Web Hosting Plans can suit with your requirement :

Enjoy 60% flat and 40% recurring discount with this Christmas 2020. It’s the right time to switch with a quality hosting provider where you will get the best resources and cheaper pricing. So now host your websites on our fast SSD server with Unlimited Hosting Plans and 24×7 technical support. Our top priority is to provide the best website hosting experience to our clients at an affordable cost starting from half dollar per month. No contracts or hidden fees also we offer a 30-day money-back guarantee.

Also, our Christmas deals will offer you high-quality services at a reasonable price and our basic plan will charge you for $4/year where you will get unlimited space and bandwidth.

Hostbazzar.com is offering professional, budget and quality shared hosting service at a very affordable cost starting from half dollar per month. We are confident that we can provide nearly instant support to all users if they have any problem and can fix with the priority. We are available on the 24/7/365 days basis to ensure that all websites hosted with us have practically zero down time and highest uptime.

We operates on our own servers and not sharing our resources(CPU, RAM, IPs, bandwidth) with any other company also have cloudlinux installed on our servers. Therefore we can quickly install additional software and troubleshoot if any problem happens and make the needful changes.

We also offer 30 day money back guarantee for all clients. Full unconditional refund will be given immediately for any refund request.

Our valuable reviews can be found : https://hostadvice.com/hosting-company/h…r-reviews/

Thank you for reading our offers!

Thanks for your valuable time.

DreamWebHosts is a premium hosting provider that provides web hosting solutions of all types. We make sure your website is fast, secure, and always up so that you stay focused on what you do best. We offer everything that you need to build, host, and manage a website. Our top priority is to provide the best website hosting experience to our clients at an affordable cost.

Quote:Save 50% on Linux web hosting plans. Enter promo code DWHSTARTUP50 during checkout. Renewal would be at a regular price.

Free Add-ons provided with all plans:-