Like a lot of people, I suspect, my ‘go to’ terminal emulator on Mac is either the vanilla ‘Terminal’ application, or else iTerm2. These don’t really cut it, so I’d like to go back to using xterm. I have a sort of wrapper which I run and it has stuff like:

It opens six xterms for me, each one with a different title. That works, but what I can’t do is use the keyboard to switch between the windows. The ‘Window’ menu says that (for example) xterm 3 is ⌥3. But all that does is to take a screenshot with Skitch.

Is there any way to map any key(s) I want, to achieve this?

I searched homebrew and he gave me this message:

I run the advised command, but wish to revert it back, because a deep clone is slower than a shallow clone.

I found some docs howto do shallow clone, but I wish to use the same approach like Homebrew project.

An article about delayed script executions has been published recently. I could reproduce this on my Mac by running the following:

The article states that

Some users have a Developer Tools category in the Security & Privacy preferences pane (I don’t). If your terminal is added to this category, you will not be able to reproduce this delay.

I can’t find this in my settings.

How can I disable whatever Apple is doing here not only for my Terminal, but for all other developer related applications (Xcode, IntelliJ, etc.)?

I’ve recently moved from MacOS 10.4 to 10.15. I use Japanese/English/Russian/Chinese, and I’ve noticed a different behavior when copying between terminal windows on 10.15. Extra characters, specifically 00~, 01~ are prepended and appended to my buffer. As an example,

when pasted.
I’m unsure if this issue is a function of the languages or a significant change in behavior in the terminals, but it’s rather bothersome.

Any suggestions on what might inhibit the addition of extra characters in the buffer would be greatly appreciated.

I am trying to understand the output of the airport command line utility on OSX:

While I’d to love how to understand all of the output above, most specifically, I am trying to figure out if there is any way to programmatically get the “Link Speed” as shown in the Network Utility program: 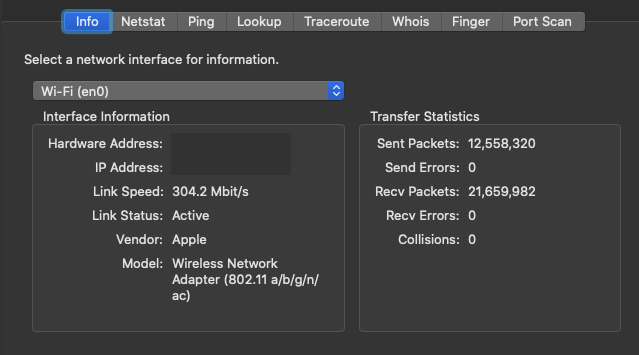 It’s perfectly normal for this to occur; when you login Terminal remotely bash does a reverse DNS lookup. It will only be the same if the hostname is not specified on the network you’re connecting from and there is no reply from the DHCP server, or the reverse lookup against the remote DNS server fails to resolve.

You can easily over-ride the default setting by using this command in Terminal:

You can check it by using:

Here is the function having the problem:

The var $disk_id would normally be something like disk2s1, and $mountedState would be either “Yes”, or “No”. The function is used to make sure needed external disks are mounted, and if not, to mount them.

Some output related to the isMounted function from the properly running script in a terminal:

Here are my observations, all of which pertain only when running under launchd on Catalina:

Note: Some suggestions about forcing the shell to /bin/bash had no effect/usr/.

In Mojave, both the terminal and launchd worked fine; but under Catalina, the identical script will not work from launchd.

I’m trying to create an ISO file of Mojave, in my Mac with Catalina with these commands (I already have the installer of Mojave in Applications)

But with this command, I have the problem

My OS doesn’t run so I have to reinstall it. But I don’t have any backup from the Time Machine or iCloud (my fault). I don’t want to lose my information. I tried two different things.

And here’s the problem, I can’t do that. It doesn’t give me any option to do it.

And here’s the other problem. It doesn’t recognize the external hard drive. So I tried to mount it with diskutil, I could run that command with help in this forum. But I can’t use it. I tried to disable the SIP from the Recovery mode with csrutil disable but it appears me that is only available in Recovery mode. But I’M IN THE RECOVERY MODE.

Anyway, I don’t know if continue that way, or maybe there are other easier solutions to have my backup. Thank you!