When running clamav, it consumes more than 800MB of memory as it loads all the signatures into memory. For this reason, I have configured it to operate everyday at 3 am instead of continuing.

Until now, tomcat and clamav got along very well. At 3 am yesterday evening, the tomcat service was closed when clamav started operating.

I know the upgrade is an immediate answer, but until then, my questions are:

I currently have two Samsung EVO ~ 500 GB NVMe drives running Windows 10 in RAID-0. I would like to delete the RAID-0 configuration and use one of the disks for Ubuntu 18.04 while the other disk remains on Windows 10. I have backed up my files, so Windows 10 will be a clean install. However, I still need the same license key.

Is the following procedure correct?

From the list above, I have a few questions:

Your license key will be automatically detected, once installed, Windows will already be activated. – Ramhound March 6, 17 at 9:15 p.m.

ALSO, if it is an NVMe drive, make sure you get the right RST drivers from Intel, otherwise Windows will not recognize the drives. – BillyBob March 9, 17 at 6:20 am

Any other advice would be greatly appreciated. This is the first time I have dealt with RAID configurations and I really want it to go well.

I am writing a module that uses chrome to allow access to the camera. However, this will be deployed on computers without a real camera, so Google Chrome won't even ask for permission.

Note that using chrome settings to start is not an option. I need to install something in ubuntu which will serve as a fake camera detectable by Chrome.

Is it possible and how?

I am trying to share the folder from my host operating system (Windows 10 64 bit) to the guest operating system (Ubuntu 19.0) using the shared folder options present in the virtual machine configuration option (VM Ware Player version 15.5.2 build-15785246), even after sharing is activated and restarts the VM Player and the guest OS, the changes are not visible and I do not see no shared folder in the / mnt / hgfs directory. I don't know what the problem is, I've seen several articles on this on stackexchange, but nothing helps, so post this thread, any help is appreciated, thanks!

I have an Ubuntu 18 version and AWS EFS storage that I am mounting as NFS. I have created a script called mount.sh and given exe permission. I am able to run the script and the EFS is mounted.
I wanted this to be done automatically when the system boots.

I created a crontab – e sudo with the command below
@reboot sleep 120 /script/mount.sh

Can you help me mount this EFS at system boot. Very new for Ubuntu.

Are there other ways to delete the partition to get a macintosh hard drive? 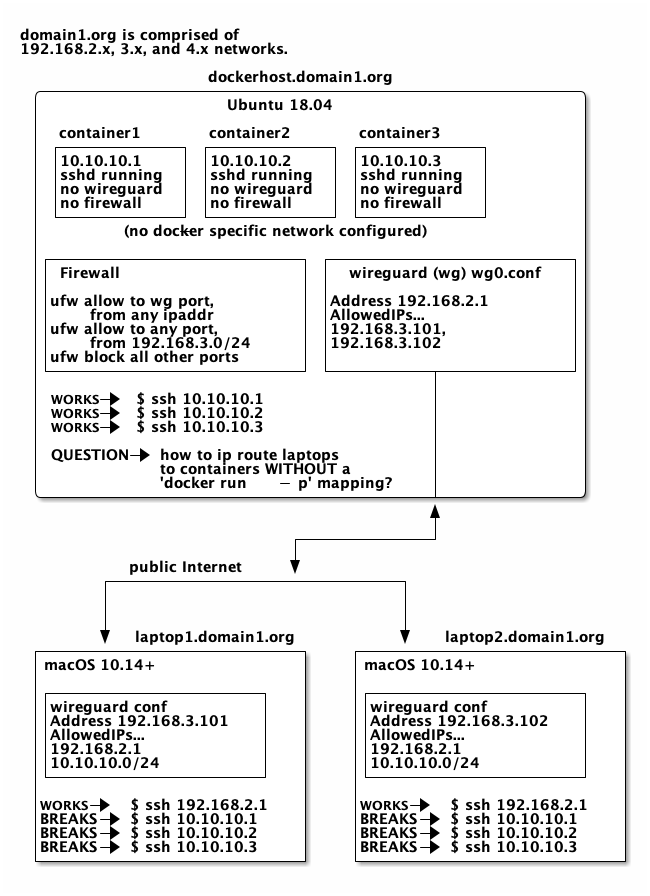 We would specifically like to do this job without any containers
wired rigging (although we tried this and it failed, see below)
details below) or any special docker network (which we don't have
tried again). But if we have to, we have to – we just want to know why.

However, we hope there will be some sort of ip routing command that we can do
to do this job.

Adding a wire protector (Interface) Address = 192.168.4.10 at container1
and the "route" of the corresponding wire guard dockerhost and
laptop1 always results in the same behavior (ssh of laptop1
breaks, from dockerhost works). Before it's the same before and after
Adding an "anywhere" firewall port access opening to 192.168.4.0/24 sure
dockerhost.

Therefore, our team currently suspects an IP routing problem and not a
wire-oriented restriction. But we speculate, because we are not deeply
experienced in network routing.

Attempting to variants the following answers, on the
Side dockerhost.domain1.org, has not (yet) worked:
https://unix.stackexchange.com/q/530790/36362

We are far from certain to perform the above steps correctly, because
we are not deeply experienced in IP network management.

The running version of Wireguard on macOS laptops follows. We have
not yet found a way to update it (there is no "upgrade" button
from the App Store; removal of /Applications/WireGuard.app then
running the results of installing the App Store in the same older version; all
which is quite frustrating) for the v0.0.20200127-17 claimed to
https://www.wireguard.com/install.

As of 2020-03-19, the source for this document (including the ditaa text source for the Asciidoctor diagram) can be found here:

I would like to do a bwa (this is a function that aligns the readings of a file with a reference sequence) in a loop for all my files.

This is the function for a single file:

And I receive the sam file as output. But when I want to loop, I run the following command:

Due to an upcoming event, we are expecting high traffic (approximately 2000 concurrent users) for several weeks on our Magento2 powered e-commerce website running on Ubuntu, NGINX and PHP7.1-fpm. Since our catalog is quite large, we have upgraded our Digitalocean droplet to the highest specifications between 192 GB of RAM and 32 virtual processors.

The site is running at lightning speed, however, once we reach over 800 users it starts to get pretty slow and after a while it will end up showing 502 bad gateway errors which we really can't afford for this temporary event.

We have tried several parameters, but nothing seems to work reliably. Here are some parameters:

So now we are looking for a solution or a way to calculate them exactly? Are there any other considerations or settings that we should change?

Here is our Magento nginx.conf:

Expert help would be greatly appreciated, thanks

I'm a bit lost in what exactly happened and how to do it with a recently extended zfs configuration on Ubuntu 18.04.

I have had a storage server that has worked well for years using ZFS with 2 pools each containing 10+ disks. Everything was fine until …. we decided to expand a pool by adding a new 10 disc vdev. After plugging in, everything worked fine. Here's what I did to add the peripherals (what I now know I should have done on disk-by-id :-():

Next, I added the players as a new raidz2 videv to the existing archive pool. Seems to work properly after:

However, a reboot probably spoiled the order of the disk drives (drive assignment; not sure, but seems very likely). At least, that is what I can do with it so far after reading many documents and numbers.
The current state is as follows. The scratch pool works well. The archive pool is not:

I have tried the zpool export archive (also with -f) but it complains of a missing device.

What else to try? I just can't believe that a "simple" reorganization of the disk has spoiled all of the data in the archive pool.