I’m trying to set up a system that can automatically spin up and down video game servers as docker images. In this case, factoriotools/factorio-docker. Each game is a different, distinct single-pod deployment of that container, and therefore (in the simplified case) needs its own IP address that can listen on a specific UDP port. Load balancers are redundant and irrelevant, and Cloud NAT doesn’t appear to allow ingress traffic easily.

There’s a couple ways I know of to get this to work, both with pretty major compromises:

There are probably ways to work around the limitations of either approach (for the second, keep the hosts short-lived and keep the firewall strict, and it should be mostly OK?), but I can’t help but think there’s a better option that I can’t find described in the official kubernetes docs. Does traefik have some trick I don’t know about? Is there some way to get a variant of MetalLB that can dynamically allocate public IP addresses as I need them?

How do I get each server-container to listen on a different public IP address with a specific UDP port, without making security impossible in the process?

If you are connected to the closest available server through OpenVPN UDP, you can expect around a 30% drop in speed.

Why should one expect a 30% drop in speed when using OpenVPN UDP? Protocol overhead? Some other reasons?

We have an application that runs on hundreds of users’ computers on our company’s internal network. We want to start sending logs from this app to a SIEM (Graylog). We have decided to add code to our app that sends logs from the app to the SIEM directly. The only question is, should we use UDP or TCP to send the logs? My preference is to use TCP because of the reliability, but what happens if the SIEM goes offline — won’t that cause our app to block, thus slowing down our entire system? I am very curious about how other companies handle this situation. I have read a few guides online, and most recommend TCP because of the reliability but none address the blocking issue.

I have an iptables rule that I use to drop UDP packets on a random basis. I’m trying to convert this to nftables, but I’m likely making a syntax error, because nftables complains that the “dport” argument is unexpected.

I tried using iptables-translate but I get the same rule back:

I tried to create my own nftables table, chain and rule using:

But when I try to use the rule, I get the error that dport is unexpected:

I’m trying to figure out how can I allow UDP connections on a port only if a TCP connection was made before, I’ve tried rcheck, but no luck.

Student project of mine i got 4/5 points but i suspect theres a lot of weird stuff in there. I never had a chance to hear my teacher feedback about it and it bothers me so i figured out somebody could take a glance at it please and provide some feedback.

Background: I am currently trying to create a VPN for playing old computer games via LAN (Empire Earth / Warcraft III) and to bypass geo-blocks.

I am using the docker image by kylemanna and my openvpn.conf is the following:

I already found the related topics here on serverfault, with this one stating that you need bridging to get the UDP broadcasts to work.

From sniffing packages I know that Empire Earth sends a UDP package to 255.255.255.255 (broadcast) – these broadcasts also show up on another PC using Wireshark (both are using a different internet connection) – but I really don’t get why the games aren’t heeding these broadcasts. I might missing something obvious. Pings via the Windows cmd also work.

Here’s an example from the wireshark session: 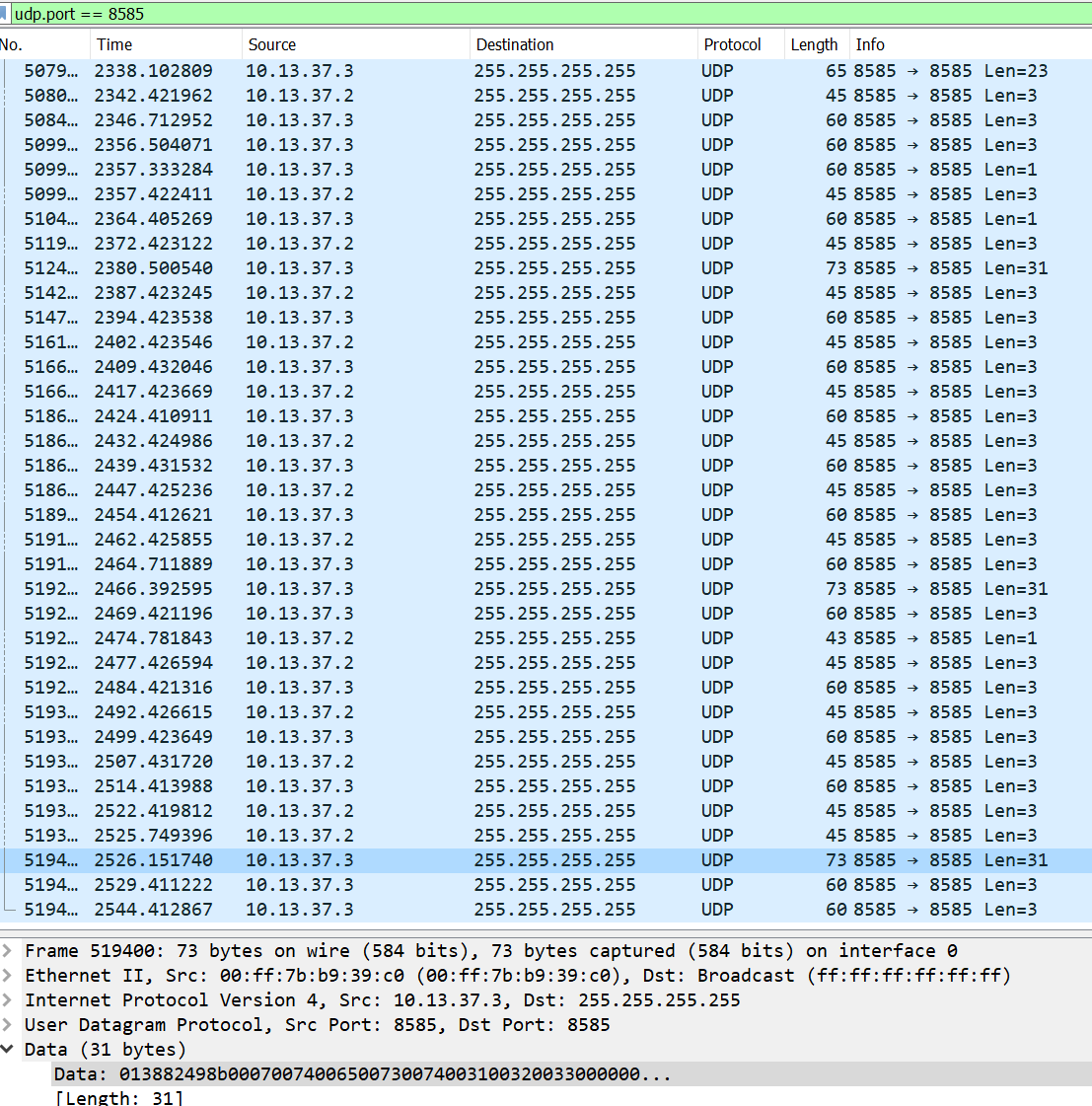 Hello I wanted to rate limit any udp traffic coming from 1.1.1.0/24
Can anyone suggest which rule shall I use?

I searched on google and got very big scripts. But didnt get any for rate limiting a ip/subnet with just 5 packets/sec

Now I have read I could use Janus VM to route traffic from pfsense wan side, out the Janus VM. The VM is a tor proxy. http://www.janusvm.com/tor_vm/

My concern is what if the malware uses udp or some weird port numbers to communicate. For example C2 traffic is SSH. Will Tor be good enough, or should I pay for a vpn service?

The X-Plane software outputs a GPS stream that is sent to the app, which the app then interprets.
it is sent via UDP as an ascii Stream.

When the stream is sent, it shows the gps position of the plane in Xplane on a moving mapp in the App, on an Ipad.

So while this seems to work, when using my piece of software, which will change the numbers to send through the correct position and speed, but right now is just a simple c# udp sender it refuses to work.

This is the code for my Sender, in order to mimic the Xplane software as much as possible i have set it to use the exact output port, and the text boxes in my win form feed in the message, ip address, and remote port number.

The actual question i suppose i am asking here, is why would copying the start of packet data work in Packet sender in the first place, and not in my c# program?

Below are two packets from wireshark one of which is from Xplane, the other is from my piece of software.

I understand that this is a very specific issue, but i simply do not understand why the same stream works from one piece of software and not another.