I have a bunch of randomly generated boids flying around on my screen, but I want a function that can give them a field-of-view where they can “see” other boids or obstacles.

The code I wrote gets all the pixels around the boid in a circle of some size. Then I try to filter through them to find only the ones in front of the boid within a 30 degree cone-shaped field of view.

I am making this project in Unity using compute shaders written in HLSL.

For each boid, I gave a float2 position and a float angle. In my kernel, I run a function that tries to set the color of all the pixels inside my cone to red. Here’s the code:

As you can see I get all the pixels within a certain boundary and filter out ones that are too far away. This works perfectly in retrieving all pixels within a circle around my boid. My problem is with checking if the pixel is within my boid’s view-cone.

I tried following this explanation for that code. This works perfectly, but it seems to “mirror” my cone over the x-axis like this: 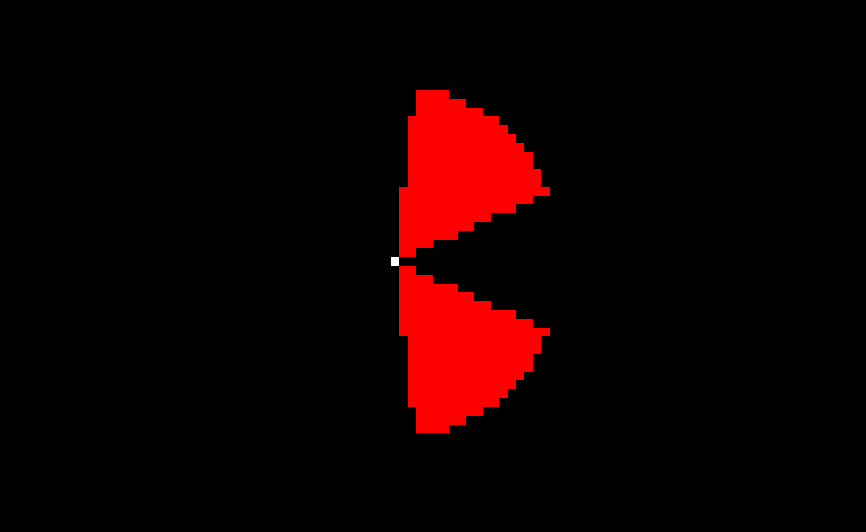 Also, my boids get generated with a random number between 0 and 360 as their angle. I multiply this angle with PI / 180 to convert degrees to radians (This all happens on my C# side and then I send a ComputeBuffer through to my Compute Shader). However, I noticed that when the angle is generated larger that 180 degrees, the cone doesn’t even render at all.

What might be a better method to go about calculating this FOV cone for each of my boids?