I have a use-case where I have an object with a Collider2D and a Kinematic RigidBody2D in order to do Kinematic movement.

However, I also want to be able to select/hover that object with a OnMouseDown/OnMouseEnter/etc, using a larger collider than I would use for the kinematic movement.

My current attempt at a solution is to have Physics-related scripts/rigidbody2d/collider2d as the top level game object, and to have a child object, with a larger collider2D which will respond to OnMouseX events.

I’m passing that into a script that sets MainCamera’s event mask: 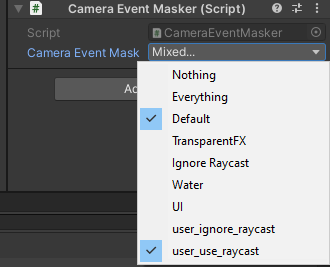 What I notice is that OnMouseX events on the child will work IF the RigidBody2D on the parent is deleted…however, if the RigidBody2D is there, I won’t receive any events. Anyone know why this is the case, and if there are other workarounds or solutions?